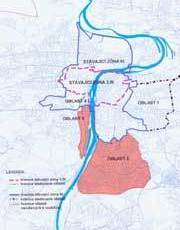 Between 1990 and 2003 the number of registered vehicles in Prague almost doubled and the volumes of traffic more than doubled. Furthermore, Due to the introduction of fees for heavy goods vehicles in neigbourhood countries of Germany and Austria increasing freight transport was observed within the Czech Republic, including many city centre areas such as Prague.

Faced with these problems, the main aims of the Prague local government was a reduction of emissions, noise and energy consumption within the city, an increasing acceptance for clean vehicles and a more attractive city centre promotion.

The environmental zone in Prague operates via a permit system for access in the city centre for heavy vehicles and buses over 3.5 tonnes and in the surroundings areas for vehicles over 6 tonnes. Drivers who wish to carry out goods delivery or building works within the zone area can apply for permits, which are issued on the basis of vehicle weight and legitimacy of access to the controlled zone. The differentiation in weight limits between zones was introduced to ensure widespread support for scheme implementation. The Institute of Transportation Engineering of the City of Prague, the police, inhabitants and fleet operators are all involved in the implementation and operation of the environmental zone. The police are responsible for enforcement within the zone; they carry out random checks for infringement of entry and award fines to those who do not comply with entry requirements.Traffic signs at entry roads indicate the environmental zone.

The economic efficiency of the measure has not been calculated. Potential costs of the environmental zone are:

From the environmental zone no significant revenue is expected apart from fines, in contrast do measurements like congestion charging.

Compliance levels in the new part of the environmental zone were estimated at roughly 50 %. The heavy vehicle traffic was reduced up to 85% by this measure on the busiest routes, e.g. caused by shifting on appropriate routes like the city ring road.

The results are calculated on the foundation of a traffic survey to identify the number of vehicle kilometres before and after the extension of the environmental zone.

Public acceptance was not really a problem in Prague, especially for inhabitants affected by the negative effects of traffic. There was less support from transport companies operating heavy vehicles within the city. However, Prague overcame this by adopting a participatory approach to the design and implementation of the scheme.
Heavy haulage operators with businesses located within the zone respected the regulations and in many cases sought solutions by using lighter, compliant vehicles, one of the key objectives of the scheme.

The Prague environmental zone was successful in reducing heavy-vehicle traffic flow, and managed to achieve a shift to lighter, less-polluting vehicles.
However, fleet renewal can often take time and it is therefore important that zone rules are set at an appropriate level, not too weak, there may not be enough pressure on operators; if too stringent, operators may be driven out of business.

A 50 % compliance rate has been reported for the Prague environmental zone. The compliance rate, and effectiveness of the measure, could be increased through the use of more stringent enforcement methods (such as cameras), which would increase the operating costs.

More about environmental zones in Europe: