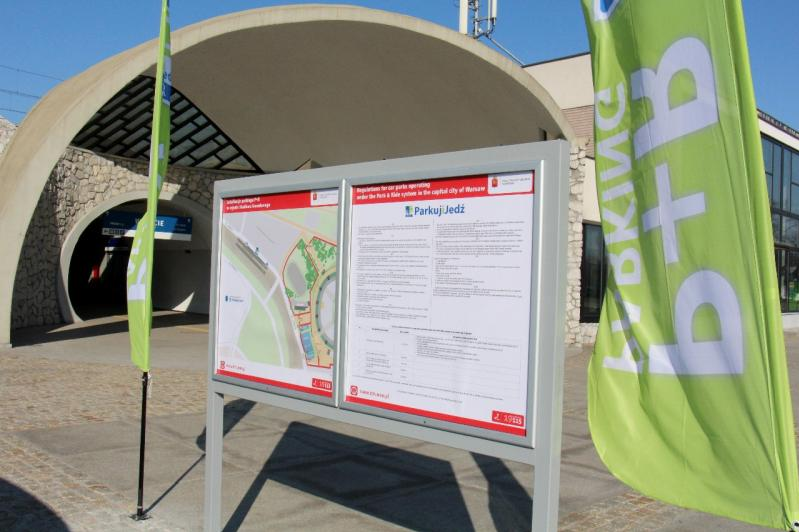 The City of Warsaw is becoming more and more congested. Instead of getting quickly from A to B, citizens and visitors to Warsaw are forced to battle against traffic jams – delaying considerably the time it takes to get to school or work.

Commuters are increasingly looking for solutions aimed at saving time, fuel and money. One of these, provided by the local authority, is the introduction of the Warsaw Park-and-ride (P&R) system.

Warsaw, typical of a central European metropolis, faces the problem of heavily congested roads. The car owner ratio is steadily growing; currently, there are over 600 cars for every 1 000 residents of the city. One of the negative impacts of more cars is that urban space is becoming degraded. Cars cause heavy road congestion, noise and air pollution. In addition, Warsaw is facing serious parking challenges. Drivers park their cars freely, even in public spaces that are not designated parking locations.

Residents are craving the recovery of their urban space and want to reclaim that what has been taken over by cars. This goal is also reflected in official policy. Strategic city documents stress the urgent need to reduce car traffic in the city centre. But in order to minimise the social costs of the ongoing changes, it is necessary to provide an attractive alternative to owning a car. This is why Warsaw decided to invest a large part of its resources in the public transport (PT) system, thought to be one of the best-functioning in Europe. In addition the city invested in the Veturilo public bicycle system, the ever-growing network of bicycle paths - and the P&R car park system

Although the first P&R car park in Warsaw was constructed in 2006, the discussion regarding the establishment of a P&R network began much earlier in 1999.  The principles of operating such facilities were set out in later stages. At that time it was assumed that, after leaving their cars in a P&R car park, drivers who had tickets for public transport (one-day, weekend, 30-day, 90-day or senior tickets) would transfer to public transport which was destined for the centre of Warsaw.

Potential locations of such car parks needed to be identified and selected. One of the main selection criteria was the availability of a transport hub. The locations picked were all close to transport hubs, in particular rail transport. The Warsaw authorities entrusted this task to the Board of Transport Authority (the ZTM). In early 2006 the authorities started the construction of the first car park, which was officially up and running in the first half of 2007. Not only was it the first parking of that type in Warsaw, but it was also the very first in Poland. Further car parks were being completed by the ZTM in subsequent years.

Eight out of the thirteen car parks that are currently fully operational were co-funded by the EU from the European Regional Development Fund under the Regional Operational Programme for Mazowieckie Voivodeship 2007-2013. They have a joint capacity of almost 1 000 parking spaces, including 85 for disabled drivers. In addition, there are nearly 640 bicycle parking stations available at the car parks. Warsaw is planning the construction of further P&R car parks with public transport connections. The decision was made to start the construction of at least five new car parks in neighbourhoods with heavily used train stops all within the city borders of Warsaw.

Igor Krajnow from ZTM Warsaw said: 'The Park-and-ride system operates perfectly in Warsaw. Some of the car parks get filled to the brim every day on working days, holiday seasons excluded. The volume of traffic is slightly reduced off-season. If the transfer car parks are filled, fewer cars are parked in the streets of Warsaw.’

According to ZTM Warsaw, 740 000 cars used P&R car parks in Warsaw in 2014. Krajnow believes that one of the reasons P&R car parks in Poland's capital are popular is because of the low cost. Parking at the P&R is free when the user buys at least one one-day travel card. 'As such it is definitely less expensive than a daily onward journey by car,' he adds. The price of a one-day travel card is also significantly lower than the cost of leaving the car for eight hours in a paid parking zone in Warsaw. 'If a driver uses the long-term tickets, which are the most cost-effective form of transport fares, the scales get tipped even more in favour of the P&R car parks. '

Be able to save time is another crucial factor. Commuting every day to the centre through congested streets is very time consuming. The P&R car parks are located in close proximity to rail transport hubs, where drivers can change trams, trains or take the metro. 'In all cases it is certainly quicker to travel by rail transport, which uses separate tracks, than to try and access the city centre by car,' Krajnow said

According to ZTM Warsaw the construction of P&R parks is a necessity in congested Polish and European metropolises as cars that would otherwise contribute to traffic jams on the streets are able to stop on the outskirts of the city. It also changes the travelling habits of the drivers, and has significant meaning when, for example, planning the introduction of charges for driving into the city centre or the introduction of traffic excluded zones.

It is important for P&R car parks to be built in locations where it is possible to have the most convenient transfer to public transport, especially to the most efficient and ecological rail transport. Clearly marking the access roads to the cars parks by using big and clear sign posts is equally crucial.

Informational activities directed at the users and concerning the basic rules of the P&R operations, and promotional activities encouraging using the P&R parks system, directed at those drivers who have not used them yet, are also important. The best way to reach potential users is to show them the most significant benefits they can get by leaving their cars at a car park.