Reducing congestion with road pricing and licensing in Singapore 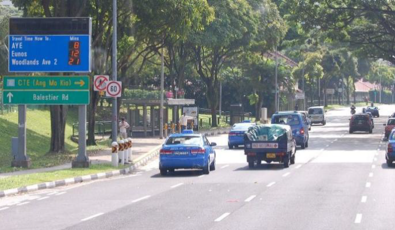 In Singapore the implementation of road pricing and area license schemes has resulted in less pollution and less congestion. An Area Licensing Scheme (ALS), which requires vehicles to have a special license to operate within specific areas, has been in place since 1975.

Singapore, situated east of India, south of Malaysia and west of Borneo, is called the “portal to Asia” because of its Asian origin and highly developed standard of living. The country, which covers an area of 710km2, has more than five million inhabitants and over 11 million tourists each year. This, of course, creates difficulties with traffic congestion. The government found itself forced to find transport solutions and to this end implemented road pricing and license schemes.

To enter the restricted area of the license schemes, drivers initially had to purchase a paper license (US $2.20 daily or US $43 monthly). A major disadvantage of the paper-based area licensing scheme was that once the license was bought, the vehicle could enter the area as often as desired and was not charged a higher fee when the roads were congested.

To address this problem, the ALS was replaced by Electronic Road Pricing (ERP) in September 1998. It is designed to minimise traffic congestion and maintain optimal traffic speeds of 45 to 65 km/h for expressways and 20 to 30 km/h for arterial roads. The system introduced electronic toll collection, electronic detection, and video surveillance technology. The charging area is divided into central business districts (cordon pricing), and expressways and ring roads (congestion pricing). The in-vehicle unit communicates with detectors when passing under gantries and the respective charge is deducted from the driver's cash card. The amount varies by time of day (rush hour is 2-3 times more expensive), type and size of vehicle (taxis and passenger cars according to engine capacity, goods vehicles and buses and others) and the type of road (arterial and expressways).>The cash card can also be used to enter parking facilities without having to stop.

ERP was part of a comprehensive strategy that included integrated land use and transport planning. Through this planning approach a better mix of employment and residential uses decreased the need to travel. The highest building density is concentrated at and around train stations to guarantee maximum accessibility. In addition to the ERP and the land use planning, Singapore provides a high quality public transport system.

Several Studies have concluded that the ERP has reduced congestion and pollution significantly and, in conjunction with a comprehensive TDM strategy, maintained high mobility. The establishment of the restricted zone (RZ) within the ALS
scheme led to a reduction of 31% of traffic in the city area which is mainly due to motorists not using the CBD as a bypass. The total traffic decreased by 13% while traffic speed increased by 22% in the RZ. Off-peak traffic was reduced by 7.6% while evening traffic increased by 28%. This is due to a reduction of charges compared to the ALS system during evening hours. A total of 80,000 kilograms of CO2 emissions were reduced (ITDP 2011). ERP’s revenue significantly exceeds its operation costs.

Two important success factors are high public acceptance and strong enforcement in Singapore. The ERP is considered fair as it charges on the basis of the user-pays principle while vehicle tax rates have been lowered. It is further considered convenient because of its high technological standards.