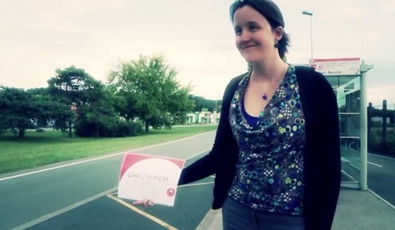 Stop Covoiturage is an innovative scheme combining aspects of hitchhiking and carpooling. Launched in July 2013, the initiative is being run in Val de Saône, France. Members of the scheme travel short journeys, taking people to public transport hubs or to work. In boosting the connection between public and private transport, the number of individual car journeys are reduced and levels of intermodal transport are raised. Physical meeting and stop points have been established at strategic locations where people without a car can spontaneously meet a motorist to share a short trip.
Context
Territoire Saône Mont d’Or lies to the north of the Lyon metropolitan area. Sixteen municipalities make up the region, which is also part of Greater Lyon. This relationship requires a high level of integration between the metropolitan transport system and Val de Saône. Service is offered by Lyon’s public transport operator. However, the range of the network does not extend sufficiently to meet the needs of commuter traffic in all areas. In order to provide an intermediate and convenient way for bridging this gap, spontaneous carpooling was organised through Stop Covoiturage – a scheme inspired by Belgium’s Voitures A Plusieurs (VAP).
Greater Lyon also offers a conventional carpooling service through Covoiturage Grand Lyon. Started in 2004, it now has over 10,000 members. Residents of Val de Saône can take advantage of this service, as well as Stop Covoiturage. Encouraging the use of carpooling is part of Lyon’s wider sustainable mobility plan. As per the EC Joint Research Commission's technical report quantifying the effect of SUMPs, such alternative modes of transportation in a small compact city reduces the reliance of unsustainable modes of transport and has a moderate impact on CO2 reduction.
In action

The initiative was taken by the Territoire Saône Mont d’Or local authority in partnership with the municipalities. To find financial support, it applied for funds through the EC’s Do the Right Mix campaign, which supported the creation of communication tools. Lyon has promoted inter-enterprise travel for some time, with Stop Covoiturage a new take on the well-tested carpooling formula. Particularly with this format, the issues of safety and security are very important. By addressing these, the service is able to be flexible and spontaneous.

Only those who register can take advantage of the service. Upon signing a commitment charter, residents are issued with a membership card, a car sticker for drivers and a network map. To receive this kit, the registration – available online to all residents - must be done with the Syndicat de communes Saône Mont d'Or (the association of municipalities).  In practice, if a pedestrian member hails a registered motorist or if a motorist offers a lift to a pedestrian waiting at a carpooling stop, both members need to show their membership details. Each party has the opportunity to decline, as well as accept, the offered lift.

Launched only six months ago with five carpooling stops, Stop Covoiturage now consists of 10 stops and 50 members. A number of non-car users have tested the scheme and reported positively on the experience. The typically short waiting time of under three minutes was deemed to be particularly attractive to users. A broader evaluation of the scheme is planned during 2014, the goal of which is to calculate the average waiting time for each stop. This evaluation will help galvanize the scheme by giving more information to users.

Each stop will also have a timetable so that users know how long they should wait (depending on whether it is during peak or off-peak hours) and in which direction they are going. Conventional carpooling is very popular in the Greater Lyon region, particularly for commuting to work. Besides the new Stop Covoiturage scheme, another organised carpool system is being experimented in Greater Lyon’s eight territories. It includes over 370 companies and about 20,000 employees.

Thanks to the success and efficiency of the existing carpooling programs, many more agencies are in the process of considering becoming part of the wider system. In 2007 new territories within the region applied to be involved, such as the industrial zone of Vallée de la Chimie (through the French Petroleum Institute) representing 27 companies and 7,700 employees. Shops in Central Lyon, the Techlid area in western Lyon, and several other trade associations in the region also have become part of the carpooling system.

A European and national carpooling scheme, BlaBlaCar, is also growing in popularity: it already has about two million users. It is anticipated the popularity of carpooling in the region will be mirrored with Stop Covoiturage.

Challenges, opportunities and transferability
One of the biggest challenges is encouraging non-car users to take advantage of the service, as many cars are still running empty or have few occupants.  The participation and support of companies and businesses in the region is essential to sustain the project and address this challenge. Furthermore, the image of the car as an individual and private closed space is a psychological barrier that must be tackled so that more people from the community feel comfortable in making use of the service.

Continued financial and material support is also required to further develop the service and promote travel planning for commuters. Ensuring consistency and the acceptability of actions by all stakeholders across the territories in the Lyon region is also of prime importance.