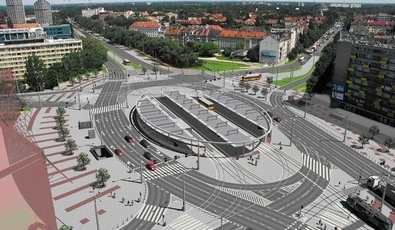 In 2008, after several years of renovation, Grunwald Square in Wroclaw was reopened. Its capacity is now greatly increased, thanks to a newly constructed, ellipse-shaped roundabout and a central island with an integrated public transport hub.

Grunwald Square is one of the biggest junctions in Wroclaw and is located in the vicinity of 3 universities. Before the redevelopment, it was a badly designed 5-inlet junction with significant traffic congestion. The 1980s design meant there were tram stops at the inlets and bus stops at the outlets of the junction, making it difficult for students and other pedestrians to access and use public transport.

Slow moving traffic and poor safety for road users had also been observed. The poor quality of the road surface and unsuitable geometry of the junction resulted in excessive fuel consumption, high levels of noise and vibrations, caused mainly by heavy traffic and trams. All these things produced negative effects on the health of residents and pedestrians.

The junction's redesign aimed to increase the transport cohesion of the region and country. Another aim was to improve the spatial accessibility of Poland within the European Union system. The square was part of a road connection which enabled transit traffic from the capital to pass through Wroc?aw towards the southern border. The transit function has, since then, been taken over by the motorway bypass of Wroclaw in 2011.

A roundabout around a central elliptical island, allowing the exchange of traffic within 5 inlets (separate from each other) was implemented. Inside the junction, an interchange hub for public transportation has been constructed, covered by a roof. The bus and tram stops have been integrated and most of the bus lines use a lane in the axis of the square, separated from common traffic.

Additionally, an underground passage along the north-south axis, under the square, has been constructed, taking most of the pedestrian flow from the square. Accessibility to the stops for people with reduced mobility is facilitated by a system of lifts.

The redevelopment was performed in two stages, with a total duration of 40 months and with an expense of €24.2 million.

Currently, Grunwald square with the new roundabout is a fundamental element of the communications system of the country, leading from the capital Warsaw to the central areas of Wroclaw. Thanks to the project, one of the major junctions of Wroclaw, located on trunk road No.8, has been cleared from traffic jams. The traffic capacity has been increased, resulting in an improved traffic flow and reduced emission levels. More importantly, it is now a more safer area for pedestrians and public transport users.

Assessments of the project revealed both advantages and disadvantages in comparison to the former situation.

Before the rebuilding of the junction, the area was characterised by dispersed stops with easy access. Under the new arrangement, the stops have been integrated, but access became difficult in some cases (access through several pedestrian crossings with traffic lights, followed by an underground passage).

Studies have shown that in most corners of the junction the access times have been reduced. However, in some directions this reduction is not evident - shorter waiting times at bus stops as a result of integration can be neutralised by increased access time.