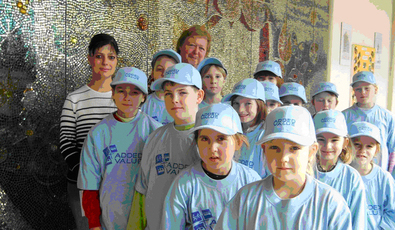 As part of the ADDED VALUE project a campaign was implemented to increase schoolchildren’s awareness about energy efficiency and transport-related environmental problems.

The main objectives of the campaign were to increase children’s awareness about energy efficiency and transport-related environmental problems. In addition the aims were to familiarize and gain support from children to the wider ADDED VALUE project’s aims and activities including the promotion of sustainable travel options and events such as car free days.

The campaign consisted of 2 main components, a survey of schoolchildren’s attitudes towards local transport services and travel options, and a competition organized for the best essays or paintings on the topic transport and the environment.The questionnaire for the survey of transport services was prepared during May 2008 and contained 20 questions to explore participants’ transport preferences attitudes to different transport modes. The survey was administered in June 2008 to 230 children attending elementary and secondary schools in Znojmo, Moravsky Krumlov and Miroslav. The main partners were the Business academy in Znojmo, the Business academy in Mor. Krumlov, the Secondary agricultural school in Znojmo and the Elementary school in Miroslav.A competition was organized for participating local elementary schools to write essays or paint pictures on the theme ‘Transport and the environment.>The aim was to get them to think about the environmental problems associated with transport, and the role that sustainable travel can be in reducing these problems. The first round of the competition was announced in April 2008 and children were given 6 months to prepare their essays or paintings. A second round of the competition was introduced in April and ended in October 2009.All competition entries were evaluated by a panel of judges and prizes awarded for the best contributions. All children in participating schools were given ADDED VALUE branded caps and t-shirts for participating in the campaign.

The main results and conclusions of the campaign were;