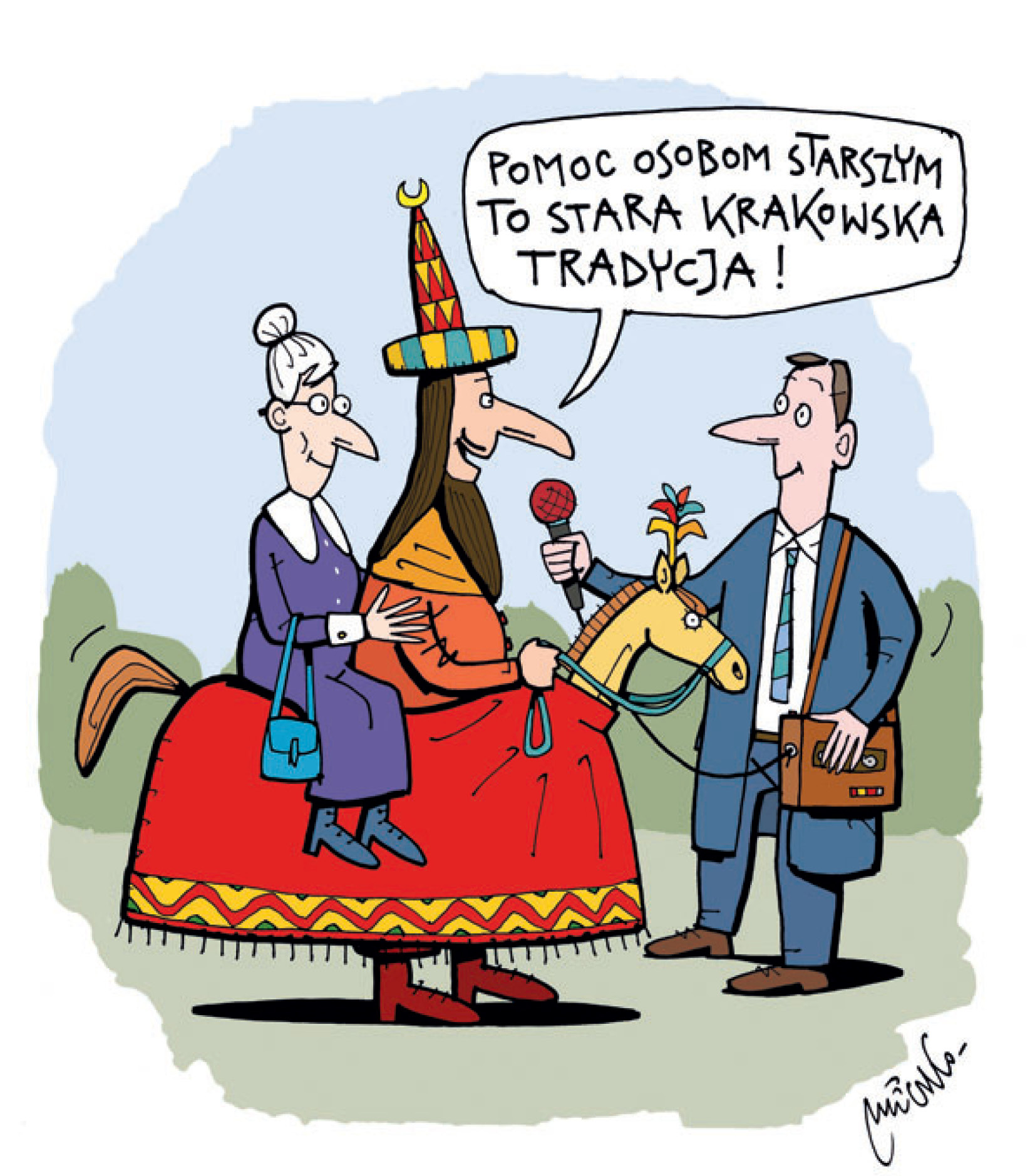 The aim of this campaign was to promote appropriate behaviour towards older people using public transport among children and young people. It started in December 2009 with a series of meetings at schools and continued in 2010 with its marketing stage – posters in the centre of the city. The activity finished in September 2010.
Context
The significance of good manners among children is indisputable. Fortunately it is still common among parents to teach their children some basic rules of 'savoir-vivre', but it does happen more often nowadays that the young generation, which was the target group of the activity, tends not to pay attention to older people’s needs and requirements. One can observe this alarming phenomenon in the context of public transport (PT). This is why the campaign was launched.
In action
The key element of the measure was to think of a campaign scenario and to find a catchy motif that would attract young people’s attention. Kraków decided to divide the measure into two phases – one focused on schools and the other directed to a wider group, potentially to all Kraków’s inhabitants. The idea of campaigning posters came up as one of the first, but to find an appropriate person that could design the posters was a real challenge. The chosen person was famous Polish graphic artist Andrzej Mleczko. It was also important to find a competent person/association that would organise the meetings with children planned as the 'inner' stage of the campaign.
The campaign commenced with school meetings in five preliminary and junior schools, encompassing 100 children. The meetings were organised in order to raise children’s awareness about seniors’ requirements in the context of their mobility in PT, and to sensitise children to their special needs. They were prepared and conducted by the 'Kangur' Centre of Educational Prevention, a relevant stakeholder.
The workshops were full of activities, providing a lot of scope for the children to use their imagination. Young participants had the chance to create new solutions for challenges facing older people while travelling. Each participant received a set of AENEAS gadgets. In order to carry out evaluation of the measure, children were asked to fill the pre- and post-event questionnaires. In May 2010 Kraków launched the marketing stage of the campaign, for which Mleczko had been requested to design graphics.
Choosing Mleczko was one of the key successes of the measure’s implementation. The artist made two posters aiming to raise awareness about the needs of older people and problems that seniors may face when travelling by tram or bus. The posters encourage all public transport passengers, especially the younger ones, to help older people in their travels, particularly to give one’s place to them.
Mleczko’s posters supported Kraków’s action in a delicately humorous manner. The posters were disseminated in the centre of Kraków, on the bill-posts located near the public transport stops, near schools, in the local and municipal media, in bus on-board television screens and on the municipal website. They were also disseminated in all Kraków’s primary and junior high schools. The marketing stage of the measure was evaluated by surveys carried out among the PT passengers. In the case of posters disseminated in schools – the evaluation was done in selected schools and classes.
Results
The costs of the measure were covered within the AENEAS project. The total cost of the activity amounted to approx. € 4 500 (excluding staff costs). The biggest part of these costs was made up by the above-mentioned graphic artist.
The measure did not face any serious barriers or obstacles and is easily transferable to other cities. The results of pre- and post- event questionnaires filled in before and after meetings clearly show a general positive change in attitude towards older people among youths. On average about 40 per cent of children (of those who had admitted their behaviours were not always correct before) expressed their promise to act towards older people in the correct way after the workshops.
Having heard a lot about the consequences of the ageing process and their influences on people’s lives, children declared they would be more conscious and aware about seniors’ needs. They also said they would be more observant during their public transport travels in order to help them or to give up places to those who need them more. Almost 60 per cent of participants assessed the meetings as 'very good', and about 30 per cent as 'good'.
The evaluation of the posters disseminated in the city revealed quite satisfying results: almost 56 per cent of respondents – citizens of Kraków - claimed that the campaign posters helped regarding this type of activity.
Topic:
Public and stakeholder involvement
Transport for people with reduced mobility
Mobility management
Region:
Eastern Europe
Country:
Poland
City:
Kraków
Contact:
Joanna Majdecka
Author:
AENEAS