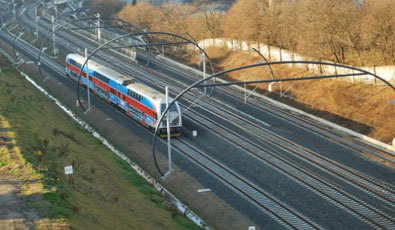 The Prague railway junction reconstruction consists of seven sites, the most significant of which is the development of the so called “New Connection” which is closely connected with the reconstruction of Prague’s Main Railway Station. The project - including the construction of 28 km’s of tracks with tunnels and bridges - has significantly improved travel times by allowing a direct passage of trains to the Main Station.

The railway junction reconstruction in Prague has become one of the most important investments within the transport infrastructure of the Czech Republic.

There are several reasons for the reconstruction and modernisation of the railway junction, the most important of which is the need for a modern and high capacity railway infrastructure which will allow the complete integration of the railway into the mass transport system of Prague, which has battled with the growing use of single occupant cars since the beginning of the nineties.

For this reason it is necessary to look for suitable alternatives that could help to solve this transportation problem. In contrast to other European cities the railway service within Prague has been insignificant, which is why the situation needes to be quickly addressed.

The Prague railway junction reconstruction consists of seven sites, the most significant of which is the development of the so called “New Connection” which is closely connected with the reconstruction of Prague’s Main Railway Station.

The project “New Connection” allowed for the interconnection of important Prague railway stations mainly to the north of the Main Railway Station. The enterprise included two new tunnel developments under Vitkov hill, replacing an existing single line connection leading along the shoulder of Vitkov hill.>Both tunnels are double track with a total length of 2.68 km. Connected to the west tunnel’s portals are 437 m of four tracks.

Three other bridges were built as a scissor junction. Within the framework of the “New Connection” they totalled 28 km. All tracks included in the project are electrified 3 kV DC. To lessen noise pollution a 2,807 metre anti noise screen was built.

The importance within this is that it permits the passage of through trains Main Railway Station. Because the “New Connection” tracks are diametrically positioned this fundamentally affects the future possibilities of city and suburban transportation development.

Until now because of a low track capacity from the west Main Station gridiron, it was not possible for suburban trains to stop in both the north and east directions.

Changes resulting from the implementation of new trains will be noticed by passengers from December 2008, when a new timetable will commence. Another benefit for Prague citizens is that a single track could be built for pedestrians and cyclists.

Part of the success of the project was also its short realisation time; thanks to the good cooperation of each contractor it was opened to traffic in the middle of 2008 as opposed to the original construction finish planned for 2010.
Information from http://www.novespojeni.cz.