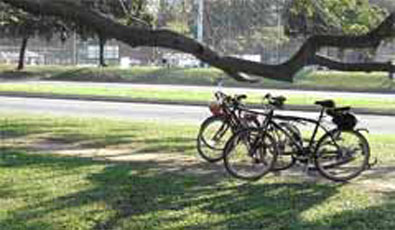 Due to misinformation concerning the possibilities, the rules, safe conducts and the lack of Bike Culture", among most of the policy makers, as well as among users and the population as a whole, there was a need for a organized group that would represent, educate, promote and defend the use of bicycles and similar forms of transportation.

Creation of an organization of users that would pursue the permanent promotion of bicycles and its culture with policy makers and the media, looking for ways to quickly solve small problems, and also showing the bike users the full potential of the bicycle on the urban scenario, as well as their rights and duties.
The pursue for a bigger and better understanding of the cycling infrastructure and its full meaning.
Along with that, there is also an exchange of information and experiences with a vast network of NGOs and other groups around the world. That effort brings more knowledge as well as helping it spread locally, trough public lectures, brochures and the website.

This is a very easy measure for implementation, in any city, there is only the need for availability and commitment.

In our case, it took 10 years developing the social and business connections and gathering data. After this step, it took a few months to the legalization of the NGO. The actions are permanent and with only four years, we have achieved excellent results

The population and the policy makers will have a point of reference when they need information, manuals, surveys, and specific knowledge about bicycles and human powered vehicles.
The city administration will be able to have straight access to the information that goes around the streets, making there solutions "street wise" and more harmonic to the local needs.
With the knowledge acquired on the website, lectures, brochures, etc, the user will also feel more confident therefore increasing their use of human powered vehicles.
The close contact with the city administration has helped to quickly solve problems, making the cycling infrastructure safer.
As a result of our actions, we won the "Prêmio ANTP-ABRADIBI 2005" for best practices in the promotion of bicycle use.