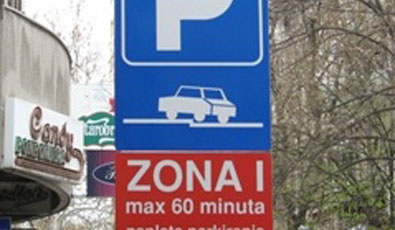 PUC Parking service" Nis, was established in 2006 with the aim to regulate parking in the City of Nis. PUC is a public company which has to work economically. Whereas it was very hard to find a free and legal parking space before PUC was established, the situation today has improved very much.

The parking situation in the City of Nis before implementing the new concept was very chaotic. Everybody used their cars even for very short movements and tended to park their cars everywhere possible. The consequence was that not only the parking lanes have been over-occupied but also the pedestrian lanes. Furthermore the traffic volume was very high because of the traffic circulating in order to find a free parking space. All in all, the situation led to negative impacts on both traffic flow and traffic safety.

Before the company started its work, the City of Nis had ordered a Parking Study, which was elaborated by the Institute of the Faculty of Traffic and Transport Engeneering, Belgrade. Based on the study, the central city area was divided into two zones: the green zone (wider center of the City) and the red zone (core of the City). In addition to that, time limits for parking have been introduced: in the red zone 60 minutes / 1000 parking lots and in the green zone 180 minutes / 2100 parking lots. Since, until then, parking in the City was not charged at all, PUC “Parking service” had to introduce the payment conditions and the benefit they will have from regulated parking to the citizens. They started a big media campaign (via TV and radio) and handed out leaflets, where they gave all the necessary information to the citizens>People can pay for parking either by a parking ticket (which can be bought on a traffic stand) or via SMS. Residents can buy monthly or annual tickets at a reduced price and are allowed to park their cars in the zone they are living in without any time-limits. The costs are as follows: in the red zone 30 CSD per hour. A monthly ticket for the tenants amounts 150 CSD, while the yearly ticket is 1200 CSD. For all other users the monthly ticket amounts 4000 CSD. One hour parking in the green zone costs 20 CSD. The prices for the tenants are the same as in the red zone, while for other users the charge in the green zone is 2000 CSD.

Parking in the City is controlled by 25 parking attendants in each shift who are equipped with PDA (Personal digital assistant). Until now the system has been functioning perfectly and is more and more understood and approved by the users. Benefits are the reduction of the number of cars in the centre along with the motivation of the citizens to use public transport and other kinds of transport. The aim is to have less traffic in the central city zone and better organized parking service.This case study has been developed within the EU-financed project TRANSPOWER (www.transpower-rp6.org).