Public Transportation Ticket on a Mobile Phone in Warsaw (Poland) 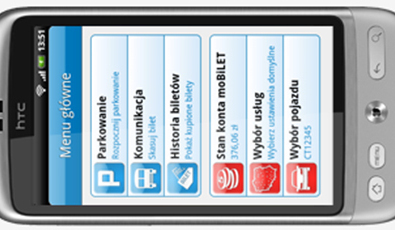 In Warsaw and in other Polish cities, there is a system of paying for public transport and parking using a mobile phone application.

In Poland, one can buy different sorts of transport tickets using a mobile phone, depending on the city. In Warsaw it is possible to purchase tickets via mobile phone including 20-, 40-, 60-minute tickets and one day and 3-day passes, using one of the following applications: mPay, SkyCash, moBILET.

The validated ticket is stored in the phone’s memory so that the application does not need to reconnect to the network during ticket control.

The system is easy and convenient because:
• one can buy a ticket at any place and at any time
• it saves time, there is no need to look for a kiosk or a ticket machine
• one does not need cash or coins
• the price is exactly the same as in the case of paper tickets
• an electronic ticket never gets wet or worn out
• one can buy tickets in all cities covered by the system.

The mobile payment for public transport tickets was introduced in Warsaw in 2008. Since then, the number of people using this method of purchase has been increasing, but still remains low, despite its obvious advantages.

In 2012, more than 83 million tickets were validated. Close to 5.5 million were encoded on city cards. Relatively few people paid for the ticket using a mobile phone. There have been 385 079 such transactions – which is less than half a percent.

The relatively brief history of mobile payments for tickets does not allow many conclusions to be drawn just yet. Nevertheless, statistics relating to a periodic decline in sales seem to indicate who pays for the trip via mobile phone. In July and then in August, the number of transactions was lower, most likely because of the holidays, suggesting that most of the mobile payment users are young people and students.