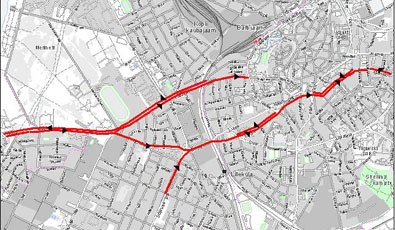 A Swedish company called Thoreb AB (executor of the procurement contract) has carried out the installation of equipment for priority system. Thanks to additional financial funding the final number of priority vehicles has been increased from 111 to 158. 99 Tallinn Bus Company’s (TAK) buses and 59 Tallinn Tram and Trolleybus Company’s (TTTK) trolleybuses are completely equipped. The installation of equipment for intersections, IT-Radio node and 6 WLAN stations in operator depots were previously completed, but number of intersections has grown from 26 to 30. Priority system is managing today the traffic of 6 bus and 3 trolleybus routes. The total length of priority lanes has been raised from 3,5 to 10 km.

- Reversal of the speed decrease on SMILE routes for trolleybuses. 2008 value 2 km/h is higher on evening peak hour compared with “Business as usual” and comparable with value from 2005. The car speed on same route was decreased by 11.2 km/h compared to 2005.In autumn 2008 had been started data collection for the creation of new timetables. Surveys made under SMILE-project gave us certain hopes.
Topic:
Archive
Country:
Estonia
City:
Tallinn
Contact:
Tiit Laiksoo
Author:
Tiit Laiksoo
Keywords: