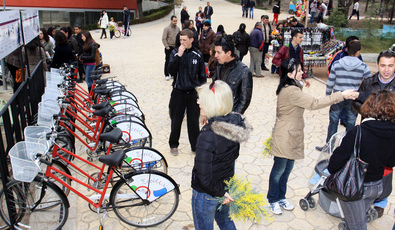 Tirana, Albania, implemented Ecovolis, a small-scale, low-tech public bicycle system, which could serve as a model for other cities where transport cycling is a new concept and where funding is limited.

Albania's capital city Tirana doesn’t have much of a utility cycling culture. However, City Hall has made efforts to accommodate cyclists on urban streets. Some of Tirana’s priority bus lanes have been designated as shared bus/bike lanes, and the city has ambitious plans to develop cycling as a serious mode of urban transport.

A separate challenge in Tirana is its hard-pressed population of Roma, who suffer from high unemployment and low literacy rates, among other social challenges.

An NGO called Social Alternatives Incentive Programme (PASS) has initiated a project, called Tirana Community Bicycle, to address both of these challenges. Its main objectives are to:
• introduce the community to an inexpensive, environmentally friendly form of transport - the bicycle;
• sell used bikes at low prices;
• donate bikes to the children of needy families and to PASS volunteers;
• establish a bike-sharing scheme in the city (Ecovolis);
• employ financially disadvantaged people to operate the bike-sharing scheme

The stations of Ecovolis are staffed by attendants, which not only creates an employment opportunity but also puts staff members on the street to explain and promote the concepts of public bikes and utility cycling.

The scheme launched on March 23, 2011 with 40 bicycles and four bike stations, each staffed by two people in two shifts. Within two months, 2,000 people had registered for the system, half of them women.

One challenge was the higher than expected maintenance needs. During the initial weeks of the project, 30 of the scheme’s 40 bicycles required repairs on any given day. Organisers hoped to address this by purchasing sturdier, new bikes.

Immediate plans called for expanding the service in Tirana with two more stations and then to branch out to other communities in Albania, including Durres, Pogradec and Vlora.

The scheme’s low investment cost and social enterprise model could make it good example for other cities where transport cycling is a foreign concept and where sponsorship is, therefore, difficult to leverage. With its many social aspects, including cycling classes, bicycle giveaways and employment opportunities, the Tirana Community Bike Project has also been an effective awareness-raising programme.