Public bicycles at the University campus in Poznan (Poland) 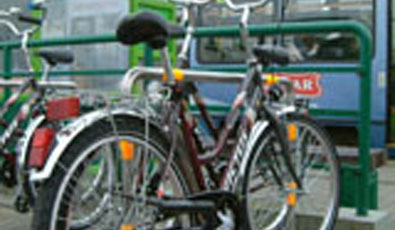 During tramway track extension, public bicycles should be provided as a substitute in transport services. Due to their costs, in the end a bike path was developed to cater to citizens with some bikes available for free rental. Practice shows that bicycles are not any alternative for tramway but an interesting social experiment.

The Adam Mickiewicz University campus was originally conceived in the seventies, to be located in the northern suburbs of Pozna?. The original spatial developments plans included the construction of a fast tramway line from the surrounding communes and planned suburbs via the campus to the city centre. Due to economic and demographic reasons, however, these plans were not implemented. The actual construction of the campus started only in the nineties. In 1997 the Pozna? Fast Tramway was finished, but at a much shorter route than had been originally planned.

The campus lies about one kilometer from the end station of the Pozna? Fast Tramway. This journey takes 10 minutes by bus because of a train crossing, and the lack of a convenient level crossing. As Morasko has about 7000 students, this causes large transport problems. Nevertheless, the university authorities declined the extension of the tramway through campus.

Because an extension of the tramway to the campus can happen only in the distant future, city hall officials considered the public bike system as the best alternative. At the end of September 2006, the city of Pozna? launched the first free street-bike system in Poland.

The original plans calling for 200 bicycles were seen as too costly. In the end, a bike path, including a level crossing over the train tracks, was built between the tram stop and the campus and 25 bicycles were put at the disposal of pass holders of MPK (Pozna? Transport Company).

Use is free of charge for those who hold a normal MPK pass.>Users only need to sign an agreement outlining the programme’s rules. Bicycles are given out as in a traditional bike hire (user receives a key from the staff) after the customer presents his or her MPK smart card. This smart card holds the MPK ticket, personal data and confirms the acceptation of rental rules.

During the system’s first month of operation, nearly 300 users signed up. They are popular also during weekends, when bicycles are borrowed for trips in the green areas closed to the campus.

The programme is limited to spring and autumn and is suspended during winter and the summer holiday. The restriction causes the difficulties, e.g. during the summer buses run with low frequency. But the biggest disadvantage relates to the rental system itself.

When someone borrows a bicycle, he or she gets a key to its U-lock, and they must lock up the bike wherever it is parked. This limits the rotation of bicycles from user to user.

The biggest success of the project was actually the construction of a new pavement - now many students go on foot from the tramway terminal to campus.

Update 2011: In November 2007, a new bus station was opened and 200 bikes were bought. But today, bicycles do not play any role at commuting to the campus (it is seen to take too much time). The bicycle hiring is not year-long, so it cannot be seen as a permanent form of transport. And 225 bikes are not seen as enough for the thousands of students commuting each day.

The University has developed new parking lots, and thus, the number of students commuting with cars has been growing.

Overall, the main success is still a direct pavement between the bus terminal and the campus, but it was badly designed. At 1,5 m wide, it is too narrow.