Public bicycle in Barcelona after its second year of implementation (Spain) 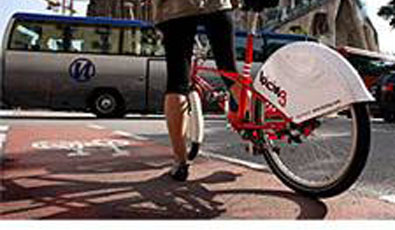 Bicing, the public bicycle scheme of Barcelona celebrates this March its second anniversary. Important changes towards sustainable mobility by bicycle have taken place in a city, where only a couple of years ago, cycling was by most inhabitants not even considered as a mobility option.

During the last two years, some surprising developments have taken place. Originally, the most optimistic forecast was that, after three years of functioning, a total number of 85.000 subscribers to the service would be reached. Now, after only two years, there are 186.185 persons adhered to the scheme. In fact, more than 15% of the Barcelona population (without counting neither the elderly people nor the children) is subscribed to the public bicycle scheme.When the public bicycle scheme was first introduced, a decline of the demand for rental bicycles was forecasted. But, contrasting with these negative predictions, in Barcelona, the public bicycle has contributed to the growth of this market segment.>

In average, each day, 35.000 trips are realized by public bicycle in winter, a number which reaches up to 58.000 trips in summer. The public bicycle has reached its maximum extension with 6000 bicycles and 400 stations. Each bicycle is used ten times a day in summer and six times in winter, and in central location the use can be 20 times per day and bicycle. It is calculated that each bicycle realizes 25 kilometres per day.