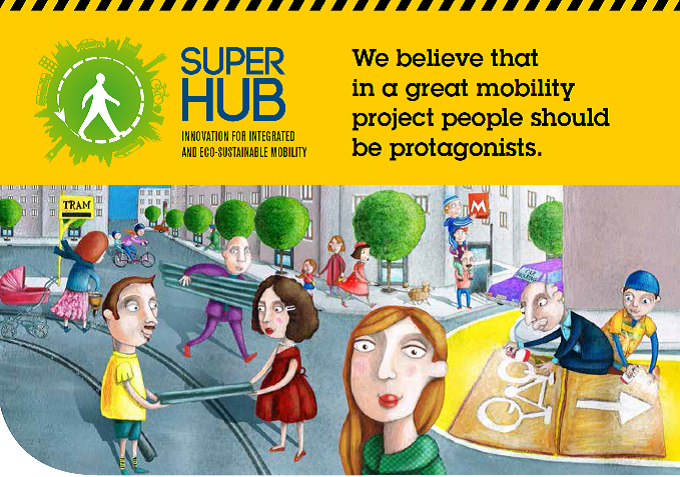 The availability of high-quality real-time and properly processed data is essential for an electronic multi-modal transport planner, which can help travellers make better decisions regarding the choice of their transport.

After 36 months of research, development and large-scale trials, the EU co-funded SUPERHUB project unveiled an open-source platform for PC and mobile applications, able to plan customised urban routes, combining real-time data from the public and private sector. The city of Milan (Italy) was one of three pilot cities where the technology was tested.

Milan has 1.32 million inhabitants; its metropolitan area contains 3.2 million. Some 5.3 million daily trips are made in the metropolitan area. Like in many cities in Europe, private motorised transport in Milan causes pollution, noise and traffic congestion.

A door-to-door public transport planner (providing information on single-mode travel) already existed in Milan, created by Azienda Trasporti Municipali (ATM), Milan’s municipal transport company. However, a multi-modal travel planner – as yet unavailable in Milan – was seen as having better potential to provide citizens with accurate, real-time information on travel options, and to contribute to the city’s sustainability targets.

The SUPERHUB project was a European co-funded project involving 20 partners from six different countries. It ran from October 2011 to November 2014. The driving logic behind the SUPERHUB project and its resulting smartphone app was that, should all travel options be presented to a user, they are able to choose a route that best fits their own preference, which more often than not is through using sustainable transport.

The SUPERHUB project team set up three test sites located in Barcelona (Spain), Helsinki (Finland) and Milan (Italy). The total costs of the project were € 9 million, of which € 7 million came from the European Union. Costs for the Milan test site were about one-third of the total.

Before developing the software, SUPERHUB Milan first established informal arrangements with the following providers  of data:

During the development stage, about 2 600 volunteers were involved, from defining the functions of the app through to testing. SUPERHUB also organised focus groups, attended by about 870 citizens, and an online facility where testers could input their feedback.

The Milan test-site was co-ordinated by Legambiente, an Italian environmental NGO. Other partners included ATM; private bus operator Autoguidovie; CREATE-NET, an international ICT and telecommunications research institute; eXrade, a newly established start-up active in the field of electronic transactions and smart service; Vodafone Italy;   and gamification experts Imaginary. CREATE-NET was the technical leader of the trial.

To use the final app – launched in November 2014 - a user enters the destination, departure time and optional preferences regarding emission, costs, physical effort or how satisfied previous travellers were using the route.  SUPERHUB offers suitable travel options which even take weather conditions and disruptions – submitted by users - into account.

The SUPERHUB project was developed as planned. The team delivered:

The ICT framework is now transferable to other cities in the EU, something which Marco Menichettti from Legambient believes is just as valuable as the app itself.

The demo travel planner not only offers personalised options for traveling in the city, but it has also been designed for booking and buying of trips.  ATM is now applying SUPERHUB technology for selling e-tickets.

Menichetti said that the large-scale field trials proved very useful. ‘Not only because of the feedback, but also for the progress of the project because of the deadlines when intermediate results had to be ready for the trials.’

Milan’s platform for collecting and processing data had to be set up from scratch, and here it was the establishment of good arrangements with the providers of static and dynamic data on weather, public transport, parking, bike-sharing, car-sharing, demographic data and events that was crucial. In Milan the data providers are still co-operating, even after the end of the project.

The aim is to continue and further expand the SUPERHUB platform to other cities following the conclusion of the project. In what way this can be realised and financed is currently under consideration.

Following an evaluation, the SUPERHUB team found that concept of the project was very well appreciated by citizens. The graphic interfaces, especially the Android app, are considered nice but should be improved, as is the ‘eco-goals’ concept – the functionality of which is hard to use. The journey planner should also be improved, in order to continue to compete against some high-performing existing planners, for example in Helsinki.