Promotion of walking and cycling to school in Koprivnica. Croatia 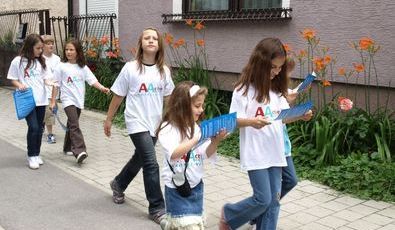 School travel plans, developed in the scope of the IEE project Active Access (www.active-access.eu) have contributed to the considerable increase in the numbers of children walking and cycling to school, by including all stakeholders and decision-makers into the process. Mental and physical barriers are removed in the common effort to support and promote active travel.

Koprivnica, Croatia, is a walkable and cyclable city. Children walk to school from the age of 7. In the recent years, over-reliance on private vehicles has led to a reduction in walking, making it an increasingly unsafe option. Cycling to school is supported by the construction of safe cycling tracks and cycling courses for children, but it is still considered to be unsafe by a number of parents. Educators were concerned with the lack of physical fitness and self-confidence of young pupils, while medical professionals warned of the alarming rise in childhood obesity. Streets near schools were crowded. A number of measures were therefore undertaken to increase the number of children walking and cycling to school.

Promotion of walking and cycling to school began in the scope of European Mobility Week in 2002. Week-long activities were enthusiastically organised and implemented each autumn, leading to an increase in the number of children walking and cycling to school for several days in September. However, a considerable number of parents objected to this travel pattern, due to busy traffic in the streets near schools. A more systematic approach was needed. School travel plans were produced for four primary and two secondary schools, based on surveys of students', teachers' and parents' attitudes, traffic police reports and municipal plans for road insfrastructure improvements.>A number of promotion activities were organised. They included:

By applying school travel plans, all schools achieved a drop in travel by car of between 1% and 14%. Two schools achieved a substantial increase in cycling from 4% to 10% and 6% to 15% respectively. Walking increased at all but two schools by up to 4%. The perception of walking and cycling to school has been increasingly positive, while improvements to infrastructure and traffic calming measures have contributed to the safety of all sustainable transport users.