Promotion of reading in the subway of Mexico-City 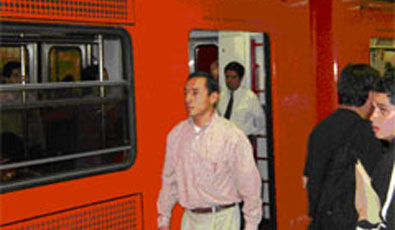 Using the public transport in megacities like Mexico-City is not always comfortable because it is often overcrowded and there is a lack of security. The distances are long and a lot of users spend their time considering only the problems of the masses transportation. The public transport’s security requires a mobility culture for the benefit of everybody.It is really alarming that the Mexican population is reading less and less. Reading is very important in order to enrich the masses’ culture and to promote solidarity and respect towards other users of public transport. Additionally, reading would be a good way of entertainment during their journey. Thus, this campaign will promote the free reading in the subway.

This campaign is a pilot project and was only introduced at the subway line no. 3 which links Mexico-City from north to south. This campaign does not only promote the reading, it also promotes respect among the users of public transport aiming to increase security. Using the subway is no longer annoying, but it achieves social and relaxing aspects resulting in this city with more than 20 million inhabitants, achieving a more human approach.

The books and texts that are offered to the public are small and written by very famous authors. 250.000 free copies are at the disposal of the subway users. 400 young volunteers with orange T-shirts - the colour of the subway wagons - hand them to the public. The young people promote reading and invite the users to borrow a copy until the end of their journey. With this, their journey become more comfortable and at the same time enhances their culture.
The users of the subway are normally low to middle class people, therefore, this promotion of reading is a very important campaign to spread culture and consciousness within the public.
The subway of Mexico-City is a public body, therefore the autonomous government of Mexico-City and the operator of the subway are the driving forces behind this campaign. Indeed the public as end users is very important, the more the public demands to read more of these copies the more the sponsors of this campaign are obliged to offer them.

This campaign has been very well accepted and a lot of copies have been requested. Around 250.000 copies have been available to the public through 400 volunteers who distribute them. The volunteers have been rewarded with pocket money for this job.
At first, the books have been offered in one of the nine subway lines available in Mexico-City. The user assumes full responsibility for the borrowed book which has to be returned at the end of the journey. The participation of the public in this campaign strengthens public spirit and promotes solidarity and sensibility for mobility which is a real challenge in a city with more than 20 million inhabitants. The costs of the campaign were about 5 million Pesos (this equates to 500.000 US-Dollar) which were covered by donations. It is really difficult to measure a change of culture of mobility, but it is positive in any case. Around 79% of the books were returned which is a positive factor benefit and an improvement in the public’s interest.