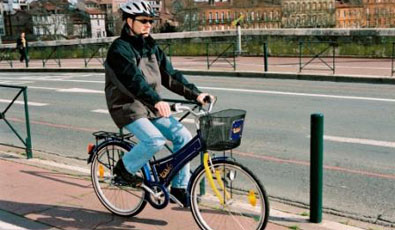 Dedicated infrastructures, equipment and bicycle renting services are key success factors in having the bicycle considered as a full-worthy transportation mode that can fulfil the daily mobility needs. The definition of a strategic plan for the next 5 to 10 years will help to enforce the partners’ efforts now and the near future.

Analyse current bicycle use in the Greater Toulouse and define an action plan for its implementation with a close integration in PT services that means:

The measure is a consolidation and an assessment of the previous actions, not only as a feedback, but also (and mainly) to prepare the further actions. There is clearly an innovative willingness to be as close as possible from actual problems and not to apply solutions “ready-to-wear”. That includes both the need of an objective and scientific approach (statistics, enquiries, etc.) and a close cooperation with the final users, with their associations and with the political level. It has to be quoted that the concept of bicycles promotion in Toulouse is not a dogmatic one, but is based upon the idea that a sustainable promotion of this mode has a pre-requirement which is to promote an acceptable, realistic and ambitious definition of its domain. That is the reason why the measure focus on integration bicycles services in PT services.

The measure was implemented in the following stages:

The main results are related to the first stage of implementation of the measure (State of the Art):

Though, the most important output of this measure is the realization of the road book which will give a roadmap to public authorities dealing with cycling in the view of the future actions to be undertaken in order to develop and promote bicycle.