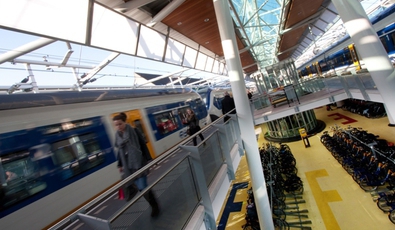 The City of Houten is renowned for its design, which prioritises walking and cycling. Houten has been called 'heaven for bicycles', and for good reason. The city has 129km of bicycle lanes, a double-decker roundabout separating cyclists from other traffic, and roads where cars are considered guests and must adapt to bicycle speed. This advanced urban design has resulted in a traffic safety level for cyclists and pedestrians that is twice as high as similar towns in the Netherlands.
Context
Houten is a medium-sized city, centrally located in the Netherlands, designed and built primarily in the 1970s. Prioritisation of walking and cycling has been a guiding principle in the design. Houten was appointed as a high residential growth area in 1966, due to its favourable location near the city of Utrecht and along the railroad to and from the South of the Netherlands. At the time around 4 000 people were residents. In 2014 Houten has about 48 000 inhabitants.
The city has two connected ring roads forming a figure-of-eight shape, each with a railway station in the middle, and no further through roads for motorised vehicles. However, the network for cyclists and pedestrians includes direct routes throughout the city. Houten has about 129km of bicycle paths, as well as a large network of pedestrian pathways. Both are separated to the extent possible from motorised vehicles, particularly at intersections.
Houten does not have a SUMP in place, but the city does have an overall sustainability policy, derived from the city’s environmental policy, which aims to 'make explicit the environmental and climate ambitions of the city'.
In action
In 1966 Houten was appointed as a high residential growth area. The design for the city, conceived by Dutch architect Rob Derks at the end of the 1960s, consisted of one ring road, one railway station and limited possibilities for intra-city car use. Instead the city has a dense network of direct routes for cyclists. Priority was given to traffic safety for pedestrians and cyclists. The design is based on the so-called 'filtered permeability' principle. This entails an urban planning and design technique that allows pedestrians and cyclists to travel through the city more directly than motorised vehicles.
In the 1990s the southern part of Houten was appointed as an area for residential growth. A new residential area was built, along with a second train station and a second ring road, resulting in a figure-of-eight-shaped double ring. The urban design remains similar to the existing ‘older’ part of Houten. On top of the physical design, Houten aims to reduce car use through its cycling and walking policy. Related measures are the excellent bicycle parking and bike sharing facilities (the so called ‘OV-Fiets’) at both railway stations, opened in 2010 and 2011. These stimulate residents as well as visitors arriving by train to use bicycles when travelling to and from the railway station. To further reduce car ownership and usage within the city, two car-sharing programs operate. Houten also organises educational programs for school children on cycling and safety in traffic.

The city continues to stick to its principles of 'slow modes first', and is constantly trying to improve its sustainable transport traffic network. In an attempt to stimulate commuting by bicycle, the regional cycling network will be improved in the coming years.
Results

Houten’s particular design and accompanying bicycle policy and measures directly translate to a high level of traffic safety for cyclists and pedestrians, as well as a large share of cycling and walking. The physical activity rate of the citizens of Houten is well above the Dutch national average: close to 80 per cent of residents are active for more than 2.5 hours per week, versus 55 per cent on average in the Netherlands. A case study performed by ITDP (2010) identified the following results:

Due to the success of the promotion of bicycle use in Houten, over-crowding of bicycle parking facilities became an issue. To overcome this, the city constructed a bicycle parking garage, combined with a bicycle repair shop, underneath the central train station. An additional 1 700 bicycle parking places have been added at the southern train station. Similarly, there was a larger demand than anticipated for trains going to and from Utrecht. The train tracks between Utrecht and Houten were doubled (from two to four tracks) and the frequency has been increased.

ITDP suggests that car parking facilities should be further restricted, through limiting space and raising prices, to encourage cycling as the main means of transport for shopping. 'Other cities that choose to replicate Houten’s model should limit or economically decouple residential parking in order to decrease car ownership. In addition, non-residential parking should be priced in order to encourage residents to use other forms of transportation besides driving to do their shopping,' suggested the study.

In 2011 Houten acted on this advice, pursuing ambitions to decrease the usage of cars within the city (e.g. to lower car dependency of commuters), and in 2012 the city included the ambition to 'increase cycling as a means to go shopping' in its mobility plans. Houten advises cities that aim to implement similar plans to prioritise cycling and walking, to make ambitions clear early on in the planning process and to continuously stress the advantages of the chosen approach.