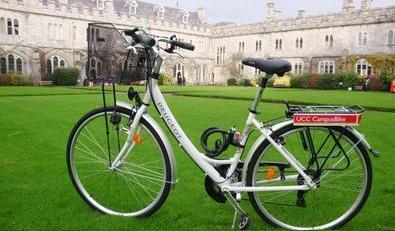 Being one of the city’s biggest employers, University College Cork (UCC) takes a great interest in promoting active travel. A major part of its efforts in this field is cycling promotion. The UCC CampusBike scheme offers a free, flexible, easy to use and fun way of travelling across the campus grounds and beyond.
Context
With 17 000 students and 2 700 members of staff, University College Cork (UCC) is the largest educational institution in the south of Ireland and one of Cork’s biggest employers. The University has had a comprehensive commuter plan in place since 2005, managed by a full-time Commuter Plan Manager. It is located less than 2km from Cork city centre and consists of a multi-site yet compact campus. Although the modal split in Cork, a city with 130 000 inhabitants, is quite car-oriented, especially in the suburbs, the UCC campus has a limited car parking capacity. As a result of this and its commitment to active travel, UCC puts a lot of effort into cycling promotion. UCC has developed a comprehensive set of promotional actions, incentive schemes and a bike-sharing system called UCC CampusBike.
In action
Cycling promotion
For three years, UCC has promoted the Irish Government’s 'Cycle to Work' scheme, a tax incentive purchase scheme. More than 450 bicycles for the commute to the University were sold to staff members. That’s 16 per cent of the entire staff body. Since 2010 the campus has installed a large number of high-quality changing facilities (showers and lockers) for cyclists. UCC has also invested in bicycle parking, with 180 modern bike parking stands installed in 2009 at the new Western Gateway Building complex, a secure lockable shed installed in 2011, and gradual upgrade of sub-standard parking stands into Sheffield-type (or similar) stands. Over the years, the University has significantly expanded its parking facilities for bikes.
The UCC CampusBike scheme
The UCC CampusBike scheme is a communal bike fleet for university staff. It started as a demonstration project in 2010, funded by the Irish Government’s 'Smarter Travel' fund. The aim is to offer a free, flexible, easy to use and fun way of travelling across the campus grounds and beyond. Staff members can use the bikes for work and private purposes. A similar scheme is offered by the Student Centre to students.
It was immediately clear that a large and highly automated, complex bike-sharing system (like Dublin Bikes) would be too expensive and too complex to handle. The plan was to keep it as simple and straightforward as possible. In the initial phase six bike stations were set up across the campus grounds, equipped with two bicycles each. The bikes are ordinary off-the-shelf, basic yet comfortable and fully fitted city bikes, with chain guard, dynamo lights and baskets.
The racks are normal bicycle stands with ordinary locks. Booking and key handling is done by the staff of nearby receptions or secretariats. The scheme is based on a certain element of trust and responsible use. This approach has proven to be successful, despite some doubts occasionally expressed at the start. At present, there are around 160 registered users, and the number of stations and bikes will be further expanded in the near future.
Results

The cycling promotion scheme of UCC shows that pin-point investments backed by a thoroughly considered plan can really make a difference. The modal share of commuting by bicycle among staff has doubled in five years (2007-2012), from 6 per cent to 12 per cent. In parallel, private car commuting has decreased, relieving car parking pressure from the campus.

An evaluation of the CampusBike scheme showed that many bikes are used up to twice per day, depending on location and weather. Thirty per cent of trips are not work-related but trips to run errands, to go shopping or to visit the sports centre. Positive individual reactions were also registered. For example, people said that CampusBike introduced them to cycling after a life of car driving.

Major outcomes and lessons learned include:

The promotion of cycling is only one element of a wide range of offers to encourage sustainable mobility at UCC, such as carsharing, the sale of tax-exempt public transport passes and a university run Park+Ride service.