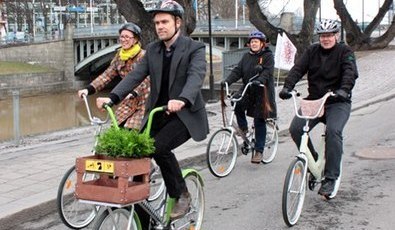 Valonia, the Service Centre for Sustainable Development and Energy of Southwest Finland, launched a campaign called Työpyöräile (Bike at Work) in 2012 to promote the use of bikes for short trips made during the workday, instead of the company car, taxi or private car.

Mobility management in workplaces has been recognised as an effective way to reduce individual car traffic in Finland, in best cases by 10-30 per cent per workplace. Valonia has been implementing mobility management activities in the Turku region for several years. The idea for the Työpyöräile (Bike at Work) campaign came from a study that showed that a 10-minute biking experience changes people’s attitudes towards cycling and increases the uptake of cycling.

During the campaign, companies, organisations and departments of the public administration had the opportunity to borrow a bike from Valonia for one month to test how a 'company bike' would work instead of a company car or other motorised vehicle for daily work tasks that require moving from place to place. The campaign ran from May to October 2012. It was implemented as part of the Mobility Management Programme 2012-2013, funded by the Finnish Ministry of Transport and Communication,the Finnish Transport Agency, the Finnish Ministry of Environment and the KKI-programme.

The workplaces could choose from five bikes that were customised and decorated by five local artists, making them easily recognisable. The bikes could be borrowed free of charge but the workplaces had the option to make voluntary donations to support the activities of local children’s homes.

The campaign and the bikes were highly visible in media and on the streets. Valonia organised several events and actions on the streets to promote cycling, including pop-up bike repair services. Facebook marketing played a big role in the campaign and every time a certain amount of 'Likes' was reached, a small event was organised.

Altogether 20 organisations took part in the campaign. The most active of them cycled over 90km with the work bike. The overall feedback was very positive. Many of the participants said they had become enthusiastic about cycling again since their childhood. Several workplaces are also considering getting a work bike.

The campaign was actively promoted through social media, in the local press, radio and through other channels. In this way, a larger audience than the actual users was reached. The Facebook campaign proved to be particularly effective and lots of people followed the campaign this way.

People's experiences were very encouraging. The main aims of the campaign were to raise awareness of possible mobility management measures for employers, to generate positive cycling experiences and to offer new insights into cycling. These aims were definitely achieved.