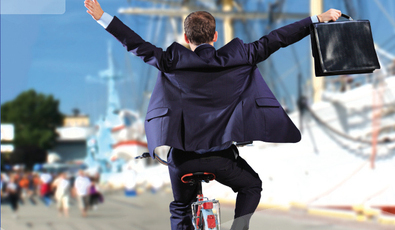 In the framework of the SEGMENT project, a campaign among new employees in Gdynia (Poland) encouraged them to change their travel behaviour. The campaign included competitions, branded bicycles, decorated bicycles, free service and a poster campaign. All campaigns in SEGMENT were evaluated in a standardised way.
Context
SEGMENT was a project funded by the Intelligent Energy Europe programme that tested consumer-market segmentation techniques to persuade people to adopt more energy efficient forms of transport. In the framework the project, the City of Gdynia created the ‘New Employees’ campaign for specified target group segments: the so-called 'status seekers' and 'reluctant pragmatists'.
New employees of this target group were encouraged to change their travel behaviour and cycle more often when travelling to work. The aim of the campaign was to make these employees feel happy about themselves when not using a car and show that they can express themselves by riding a bike.
A separate campaign addressing the segment of the car contemplators (people that do not have a car but intend to buy one) can be found in a separate Eltis case study. It was an objective of SEGMENT to be able to compare data. Therefore this campaign has used the MaxEva tool for evaluation and all results are available there.
In action
The survey of new employees (on travel behaviour and attitudes to different modes of transport) allowed designating segments of employees with similar mobility behaviour. The campaign was directed to the status seekers (14 per cent) and reluctant pragmatists (13 per cent), whose common characteristics were that:
This allowed for the creation of the campaign directed specifically for them, aiming to make them feel happy about themselves when not using a car and show that they can express themselves by riding a bike. The project was implemented in seven companies and it included:
A competition for new employees (April-July 2012)
New employees had to cycle at least twice a week to get a sandwich/snack every Monday and Friday morning. When they cycled at least 15 times they received double tickets to a cinema. Three overall winners were able to choose their own prize (i.e. a new bicycle, accessories or an organised cycling trip).
Providing company bicycles branded with the project logo for new employees
Five companies that expressed a wish for these got two bicycles each.
Free bicycle service
New employees who declared they would cycle to work were able to have it serviced in a professional service centre twice during the campaign.
'Positive' Bicycles (April-May 2012)
Twenty bicycles with positive, catchy and rhyming messages were parked outside companies taking part in the campaign as examples of people who switched from car to bicycle on their way to work - an example of a slogan was, 'When I ride a bike I feel like a wild animal'.
Decorated Bicycles (July-August 2012)
The positive bicycles standing outside companies were decorated to show that bicycles can be more attractive to cars and these days are more visible.
Poster campaign
This campaign created poster that showed, for example, happy people riding a bicycle to work, with catchy slogans like, 'Forget about the car, now the bicycle is in vogue' (a sentence which rhymes in Polish).
Results
Due to the success of the campaign, in particular the bicycle competition, Gdynia decided to replicate the measure between May-September 2013. The campaign showed that new employees are interested in such actions and willing to take part in them.
Overall, 220 people participated in the campaign. Against the trend, car driving decreased by 12per cent, cycling increased by 3 per cent and walking by 1 per cent. Surprisingly, public transport use increased by 6 per cent. All this led to annual CO2 savings of 14.9 tonnes. For detailed results visit the MaxEva database of EPOMM.
Challenges, opportunities and transferability
Lessons learned:
Topic:
Walking and cycling
Mobility management
Region:
Eastern Europe
Country:
Poland
City:
Gdynia
Author:
Aleksandra Romanowska