Promoting cycle use in Skopje. Macedonia 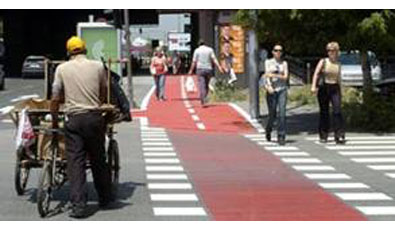 In order to promote and encourage the use of cycles within Skopje, a new cycle rental initiative was introduced in 2007.

The two main objectives of the project are the reduction in greenhouse gas emissions in the city of Skopje, and the increased use by the public of bicycles for urban transportation needs. The project, financed by the British Embassy in Skopje, aimed to increase public awareness of climate change problems, as well as some of its solutions. Accompanying the launch of the rental scheme, an extensive information campaign was carried out with the assistance of local media, municipalities, politicians and celebrities.

The project was not formally evaluated, although its success was judged on the following measures;

Further information about the scheme can be obtained at http://www.proaktiva.org.mk/ (in MK)