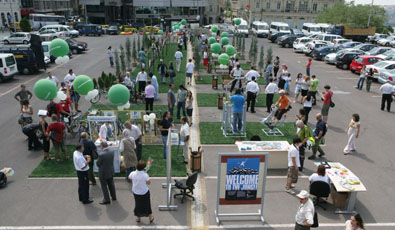 The Towards Carfree Cities Conference, held in Istanbul in August 2007, was planned with a wide set of activities to be implemented throughout the year to demonstrate how streets and parking areas can be used if they can be reclaimed from motorised transport.

Istanbul, like most cities in Turkey, is growing more and more car-oriented. Pedestrians are almost completely neglected in the current transport system, with very few areas set aside for pedestrian use, and pavements that are commonly cluttered with parked cars. In a city which seems to accept this dominance of vehicles over pedestrians the promotion of carfree urban environments under the “Towards Carfree Cities Conference” in 2007 was a challenge indeed.

For the 7th Conference of “Towards Carfree Cities”, held in Istanbul in August 2007, the local organisers from Istanbul’s Mimar Sinan Academy of Fine Arts planned a wide set of activities to be implemented throughout the year, aiming at raising awareness on the negative consequences of car-oriented growth of cities, and the opportunities for creating carfree living in currently car-dominated urban neighbourhoods.

These activities included the celebration of the Mobility Week, as well as Bicycle and Carfree Days, which were backed with cycling and walking events organised throughout the city. Other key projects were the “Streets Belong to Us” campaign (details of which can be found under another case study); the organisation of an orienteering game on the carfree islands of Istanbul; and informative radio programmes, entitled “From Tragedy to Humanised Traffic”.

One of the most effective activities linked to the conference was the conversion of the conference site into an open-air exhibition area. A huge>car parking lot at the entrance to the conference venue was temporarily redesigned as a public open space, containing various installations aimed at demonstrating alternative uses and activities for areas currently designated for the parking of cars. Each parking space was converted into a small green lot, containing such items as public benches, fitness equipment or playground equipment, and plenty of people were on hand to provide information on the conference and the associated events to visitors and passers by alike. The site, in a central and highly prominent part of the city, attracted great public attention, and there was an interest among the visitors to experience how the removal of both moving and parked cars from the urban streets, squares and spaces could improve their daily lives.

The Towards Carfree Cities Conference provided an important opportunity for Istanbul to bring raise the issue for discussion amongst the city’s politicians, decision makers, planners, etc. However, the real success of the conference lay in the associated activities implemented throughout the year. With the help of these activities, not only planners and politicians, but also the general public were informed about the carfree concept, and were encouraged to actively experience the potential benefits of more carfree urban spaces.

Special thanks to Assistant Professor Kevser Üstünda?, one of the local organisers of the conference, for providing information and photographs.

For more information on the Towards Carfree Converences, visit http://www.worldcarfree.net/conference/2010/press.php.