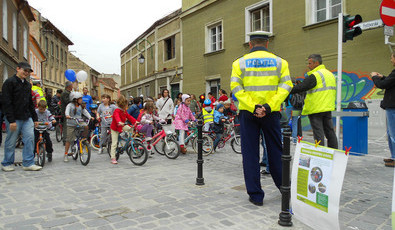 The City of Brasov together with the Agency for Energy and Environment's Protection Management (ABMEE), have implemented the first 'Children Street' in Brasov within the project BAMBINI. In order to raise awareness and promote this brand new concept of Children Streets in Romania, ABMEE organised an event launch in the historical centre to which kindergarten children and their parents, grandparents and teachers were invited.

Not every child has a playground close to home or a place where it is safe to play or to cycle. Nowadays, cars increasingly take over the streets where kids used to play. Children Streets (sometimes also called Playing Streets) are spaces where no traffic is allowed and children can play freely. The traffic is closed for a short, pre-determined period of time. ABMEE chose a street that already had limited traffic and decided to organise the event on a Saturday, in order to maximise participation and visibility.

The objective was to raise awareness for, and to prove the benefits of, Children Streets and to show how easily such actions can be replicated. The problem was to show parents and teachers that Children Streets are safe playgrounds even if they are usually used by cars. The scope was to reclaim the street for playing and, at the same time, teach children directly on the ground, limits and rules for when traffic is permitted.

The following messages showing the benefits were displayed:

ABMEE applied for a permit to organise the event on Postăvarului Street, in the old centre of Brasov. The permit stated that the street was to be closed to motorised traffic. In order to create a space for children’s activities and to disseminate the BAMBINI concepts, ABMEE had a company install road signs and traffic lights at 1m height for the children to easily see. Also, benches were installed for parents, grandparents and teachers to sit on and socialise.

ABMEE planned several activities such as: bicycle/tricycle/roller-blades contests; Dr. Bike corner – to teach children about bicycle maintenance; safety classes with Brasov Police Department and a raffle that had as prizes two kids' bikes – one for a girl and one for a boy.  All participants received fruit and materials designed in the framework of the BAMBINI project: flyers, bath books, stress buses, BAM and BINI activity kits, BAMBINI wooden toys, etc. The competitions organised were aimed at encouraging children to use their bikes and roller-blades in a playful way, thus all of them were awarded for participating.

Health and safety issues were considered during the bike contest: all participants had to cycle as slowly as possible without putting their feet on the ground. The purpose was to discourage speed and develop children's co-ordination skills.

Partners involved in the event where: the City Hall of Brasov, the Brasov Police Department, NGOs active in the field of awareness-raising on bicycle use, volunteers from Transilvania University of Brasov, local councillors and sponsors.

The first Children Street in Brasov was a success, given the number of participants (approx 200), the active involvement of kindergartens and local actors, the press coverage and the overall atmosphere during the event. It is expected that in the future Children Streets will become common practice and be replicated.