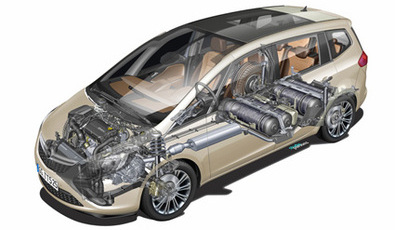 In many Swiss municipalities gas vehicles and refuelling systems have been funded and built. The main intention of these initiatives was to reduce air pollution levels and attain appropriate environmental objectives.

The compliance of air pollution values in many communities and regions presents a difficult challenge. Motorised transport is a major cause of environmental and hazardous emissions. Natural gas and especially biogas are an environmentally friendly, inexpensive and safe fuel alternative to gasoline and diesel. The results of several comparative studies show clear emission benefits of modern gas-powered vehicles, especially when refilling it with biogas, which is derived from renewable bio-waste and therefore is considered to be CO2 neutral. The number of CNG vehicles on the market has increased in recent years. Action is still mainly in expanding the retail network and the creation of financial incentives on the purchase of gas-powered vehicles.

Canton Solothurn: Due to its more environmentally friendliness as against to petrol and diesel vehicles, the Canton Solothurn advanced the spread of gas-powered vehicles and has developed various 'activities'. The Cantonal Government has set the target of increasing the share of gas-powered vehicles to 5% of their vehicle fleet. Therefore the network of petrol stations had to expand. The canton is also examining a tax exemption for gas-powered vehicles. The federal government wants to reduce the fuel tax on natural gas, biogas and LPG. According to that, a partial revision of the mineral oil tax law is provided. Various taxi companies (Soltaxi in Solothurn and Stern Taxi in Olten) use natural gas for passenger transport vehicles. In 2005 the city of Olten invested in a natural gas-powered road sweeping vehicle. The municipal Grenchen uses a natural gas company car. Even in public transport the Canton is faced with great potential for clean and environmentally friendly operation. Due to air pollution, conventional buses with diesel power engines represent bad alternatives. The bus company Olten-Gösgen-Gäu (BOGG) counters this issue with the use of gas-powered Transit busses.>The BOGG operates with modern natural gas powered buses since 2004 - the gas bus fleet is constantly expanding.

Showcase: “Salad in the tank“, Zurich
The project "Salad in the tank", an environmental project of the Migros cooperative Zurich is a good practice example how an environmentally friendly cycle can be implemented. From bio waste of the Migros cooperative Zurich the company Kompogas wins CO2-neutral biogas and feeding it into the grid of Zurich. This network provides gas stations, at which eight Migros trucks refuel the "natural gas" (a mixture of natural gas and biogas), and thus cover about 600,000 kilometers per year. An annual consumption of 200,000 liters of diesel fuel can be saved. The potential is far greater: with the whole amount of green waste from the Migros cooperative every second truck could run on biogas.

Some cantons and cities in Switzerland demonstrate that through an intelligent control of incentives, the same level of mobility with less pollution / environmental damage is possible. These cities could become pioneers in the growing gas market. The future strategy includes: