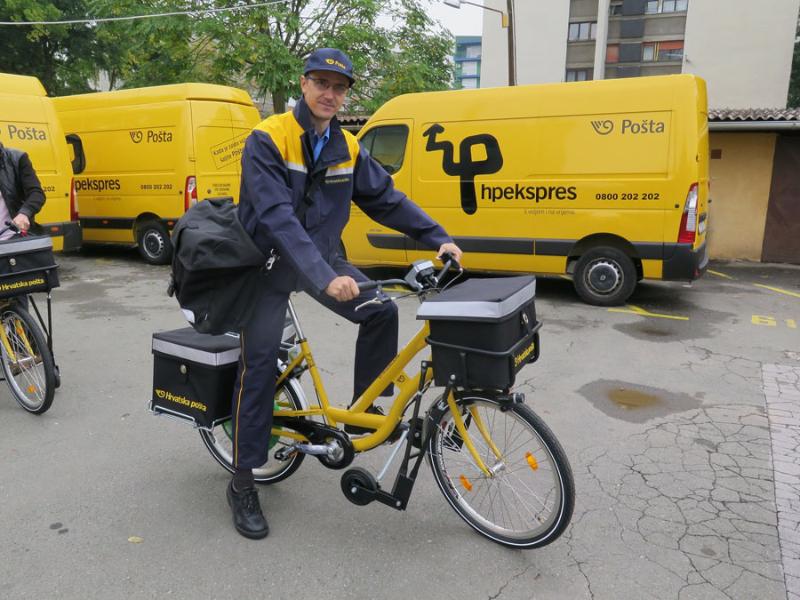 The test phase was more successful than the project anticipated, and consequently Croatian Post decided to purchase 180 e-bikes to replace its petrol-powered mopeds. In October 2015, the Croatian president officially unveiled the new e-bikes. The switch from mopeds to e-bikes will save the Croatian Post money on fuel and cut CO2 emissions, significantly reducing its carbon footprint.

The EU-funded Pro-E-Bike project promotes clean and energy efficient vehicles, electric bicycles and electric scooters for the delivery of goods and passenger transport among private and public bodies as an alternative to conventionally fossil-fuelled vehicles.

The ultimate aim of the project is to prompt a decision by policy-makers, businesses and individual citizens to replace their conventionally fuelled vehicles with e-bikes.

Companies from seven European countries – Croatia, Italy, the Netherlands, Portugal, Slovenia, Spain and Sweden – took part in pilot initiatives organised by the project. Croatian Post, the national postal operator of Croatia, was one of around 30 organisations involved in the project.

The testing of the e-bikes at Croatian Post began in July 2014 with two e-bicycles, one e-tricycle and one e-scooter. After a six-month testing period, Croatian Post was impressed to see how easy the e-bikes were to use and maintain.

The analysis of the testing produced very good results – a reduction in CO2 emissions, financial savings, positive reactions from postmen and good logistics indicators - it was decided to run the procurement of 180 electric bikes.

The specifications of the tender were set high and required that the e-bike manufacturer provide a two-year guarantee and the batteries must have capacity for 800 re-charges.

This degree of enthusiasm was unanticipated, even by the Pro-E-Bike project. ‘The Croatian Post was the only company to make a tender for such a huge number of new e-bikes during the project and we are very proud of that. We did not expect such a fast reaction from any pilot companies,’ said Matko Perović from the Energy Institute Hrvoje Požar (EIHP) in Zagreb, the Pro-E-Bike project co-ordinator.

‘[Croatian Post] concluded that e-bikes are a better solution than the scooters which have a range of 25-40 km. The e-bikes have the same range, but when the battery power is low, you can still ride the e-bike,’ said Randy Rzewnicki, the European Cyclists' Federation project manager for Pro-E-Bike.

The chosen new e-bikes are the FreeDuck 2 brand, which is a result of cooperation of company Ducati komponenti (Croatia) and bicycle producer Krpan (Slovenia).

According to sources at the Croatian Post, all of the employees will receive training on how to use the e-bikes.

The estimated annual savings (considering that an electric bicycle replaces a petrol-powered moped) is around 7,000 kuna (€930) per moped. Applied across 180 new e-bikes, Croatian Post will save an estimated €168 000 a year. The bikes will also stop the emission of over 100 tonnes of CO2 a year.

‘This is a huge replacement, with a big impact. This shows that support for electric vehicles and technology is making a difference in the marketplace for logistics and transportation’, said Ms Zeljka Fistek from the EIHP.

‘It’s a real success story for the Pro E-Bike project, for everyone who enjoys the clean, quiet service that cycle-logistics delivery provides,' said Rzewnicki.

Projects like Pro-E-bike that enable the testing of these vehicle help companies to make better decisions in selection of their vehicles, based on the specifics of their businesses and their needs, Ms Fistek believes.

Kevin Mayne, the ECF’s director of development, said that what is really important is that such an action broadens the use of e-bikes into the commercial sector, which opens up markets for commercial companies and service providers. ‘This was the aim of the Pro E-Bike project, so I think that this is a real success,’ he said.

This Croatian Pro E-Bike success story is not only significant for the project itself. It is also important for the country, as the purchase was co-financed by the Croatia’s Environmental Protection and Energy Efficiency Fund. ’This proves that main aim and concept of the project was accepted by the highest authorities in country,’ said Perović.

One aspect of the new bikes that particularly impressed Croatian Post during the 6 months of testing was their versatility. With the old bikes, if a carrier ran out of gas, the bikes were inoperable. Not only do the new e-bikes have a longer range than their gas powered predecessors, which maxed out at around 25 miles, but they can also be used as a traditional bike, so carriers never have to worry about being without power.