‘The price of fear’ - the promotional campaign of MPK Pozna? 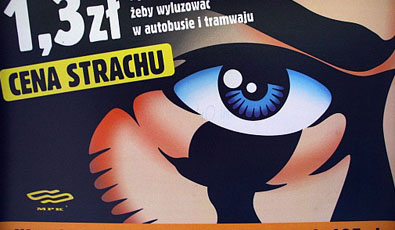 Miejskie Przedsi?biorstwo Komunikacyjne w Poznaniu Ltd. (Pozna? City Transport Company) decided to encourage passengers to punch tickets in a very controversial way - presenting the price of a ticket as the price of fear with a very high financial penalty.

In November 2007 the transport company launched a new commercial campaign on bus stops and in vehicles. The pattern of>posters was taken from comics and they propagate a slogan: "The price of fear" 1,3 z? (0,35 EUR - the price of 10 minutes ticket) is enough for staying cool in a bus or in a train’ and ‘The cost of a financial penalty amount to 195 PLN.

The campaign is connected with "bad passengers" associations. During the 90’s, tickets were inspected by a private company,and often used a lot of abuse - like frightening passengers or even beating them. However, the city haulier claims that the aim of the campaign is "not to stress passengers, but to build some positive relations" and "to present some basis of functioning of the industry to Poznan’s inhabitants".

Since January 2009 the institution that is responsible for ticket distribution and validation in Poznan public transport has been Zarz?d Transportu Miejskiego (Municipal Board of Transport) and current penalty fees can be found at http://www.ztm.poznan.pl/fares-tickets/penalty-fees/