Preparation of a new traffic and transportation strategy/Pécs (Hungary) 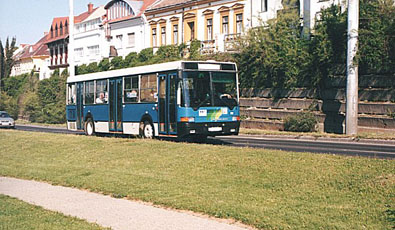 An information measure aiming at describing the future direction of transports and traffic development in Pécs.

The city of Pecs will analyse the central city areas in order to:

The measure was originally not included in the Trendsetter measures. During the implementation of the project it was realized by Pecs, that all infrastructure developments and planning activities miss innovation and our existing plans and strategies do not give answers and solutions for the problems of traffic in the 21st century. It was realized only within Trendsetter, that there is a perspective in alternative fuel use for PT; there are opportunities to establish a fixed track PT network (tram, etc.) in Pecs. When the Trendsetter project was designed Hungary was not a member of the EU, even the fix date of the accession was not known. After the accession in 2004, a new financial perspective has opened up for the municipalities in Hungary, to find solutions for those problems, which were already known, but it was never thought, that solutions might be found in the next decades. Pecs - one of the most innovative cities of Hungary - would like to utilize the new financial resources (mainly ERDF and CF grants) for transportation development and innovation incubation.
The measure aims to prepare a local traffic and transportation strategy in order to meet the challenges of the huge increase in traffic (mainly due to the use of private cars) and to provide environment friendly solutions for the transportation needs of the citizens. All objectives face the same mission: Pecs would like to become Europe’s Cultural Capital by 2010 and it is inevitable to offer good quality transportation services. The strategy covers alternatives and suggestions for ‘inter-urban’ transportation, namely the development of the local airport, the highway construction (which fits into the Helsinki Corridors) and the ‘intra-city’ transportation challenges.
The strategy focuses on 2 aspects: access limitations in the city centre to offer better living and recreating conditions and the modernisation / paradigm change in public transportation.>The strategy investigates public transportation development from 2 perspectives: feasibility of the introduction of fixed track public transportation modes and the perspective of fuel change for the existing bus fleet. Map attachments show the alternative solutions for transportation developments.
The strategy describes the vision of PT in Pecs by 2010, in order to be able to offer efficient public transportation for the visitors coming to Europe’s Cultural Capital. Considering the financial resources it focuses mainly on the utilization of the next Community Support Framework (2007-2013) and on the application of the public-private-partnership in providing communal transportation services.
The principles of the strategy will appear in the project proposals to be submitted in the framework of the National Development Plan, which co-ordinates the utilization of the Structural Funds in Hungary. The most important projects are:

During the implementation the city development department of Pecs started parallel activities:

The strategy itself does not result any change in the present system, as it only describes the direction of future investments, developments, therefore the before and after scenario are the same. If we investigate the long-term inpact, we may say, that it initiates a complete paradigm change in traffic and transporation in the City of Pécs.