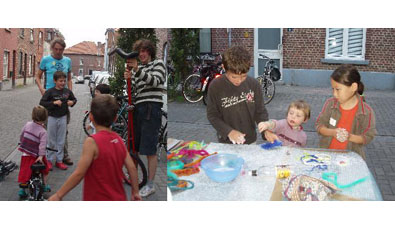 In the city of Leuven, during summer holidays of 2009, 65 streets in Leuven applied for and set up a playing street. The period varies, but takes maximum 2 weeks. One example in Leuven is the Platte Lostraat. From the 1ste until the 14th of July, the street is closed for traffic, so it is safe to play, to have a chat on the street…

Being able to play is a right. Children and youngsters need to have enough space to play. Unfortunately, in the streets of Leuven, this is not always and everywhere possible, because of too much traffic, too many parked cars… Because of that, the concept of playing streets was introduced. A playing street is a street that for a certain period of time during summer and during day time is closed for traffic. During summer 2009, 65 streets of Leuven are turned into a playing street. The Platte Lostraat is one of those 65 streets.

A playing street is not only fun for children, also the adults enjoy a car free street: eating together in the street, having an opening reception of the playing street, getting to know each other, having a chat…

A playing street has to be requested by one of the inhabitants of the street. This request is addressed to the municipality and has to mention the wanted period (with a maximum of 2 weeks) and which hours of the day the street will be closed for traffic. Different possibilities are possible. The Platte Lostraat always requests for the first 14 days of July, from 10 a.m. until 9 p.m, but a street can also choose to set up a playing street every Saturday of the summer holidays for example.

A street in Leuven can apply for a playing street when the following conditions are fulfilled:

When a request has come in at the municipality, a feasibility study is conducted. After this, the applicant will be informed of the positive, adjusted or negative answer. He or she will receive a document to collect signatures of the local residents. More than 50% has to sign this document. When they sign, they declare that they agree with the organisation of a playing street during the accepted period. Every playing street has to have several arrangers, contact persons for the municipality and the other residents.

In 2009, the period from the 1th of July until the 14th of July was accepted for the Platte Lostraat, except for Friday the 3th of July. This was because of the fact that a street nearby, closes the street every Friday during summer holidays, and the municipality wants to ensure the accessibility of all streets in the neighbourhood.

The organised activities in the Platte Lostraat in 2009 were:

Next to all organised activities, children can play in the street all the time. Next to playing, a playing street gives children the opportunity to visit neighbouring children in a safe way. Parents can let their children cross the street without having to worry about the cars. Important note here, is that a playing street in de Platte Lostraat cannot be seen as a child care. All parents remain responsible for their own children. Agreements between the residents like this are important for a good, nice and fun proceeding of the playing street.

As said before, a playing street can also be fun for the adults in the street. They have the chance to get to know each other, to have a chat during the organised activities. But in the Platte Lostraat, de playing street is also an opportunity to just put some chairs on the street in de evening and have a drink together.