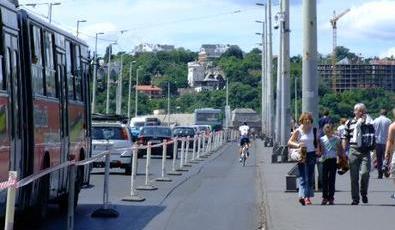 To advance the reallocation of street space from car use to sustainable modes, Budapest City Hall took a negative, ill-fated approach. It started with a proposal to create what was dubbed a temporary experiment with artificial traffic jams".

Typical of post-Communist capitals, Budapest went through a period of rapid motorisation following the economic changes of the 1990s. In the city's wider metro area, modal share for public transport shrunk from a 1990 level of 50 percent to 30 percent. Meanwhile congestion grew to critical levels, with one study putting its economic cost at EUR 400 million annually in fuel and wasted time (Sz. Erhart, Economic Review, May 2007).

A few large-scale investments promised some relief, but these were fraught with political controversy and financial difficulty.

In this context, City Hall had been under pressure to do something achievable, affordable and quick about congestion. A proposal was raised to reallocate street space on four congested main streets from car users to public transport and active modes.

The city's deputy mayor for transport proposed to get the ball rolling with a practical trial to see how motorists would react if road space was given over to cycling and bus lanes.

The proposal called for a one-month trial, from July 4 to August 2, 2009. Motor traffic lanes would be cordoned off from cars and repurposed in various was. On one street (Kossuth Lajos utca, a 3x3 arterial) lanes would be closed down on both sides of the street, with the liberated space to be used for "walking and shopping."

On three other high-capacity streets, closed lanes would be available for car parking.

However, before the deputy mayor could introduce the idea to the public, it appears to have been leaked to the press by unnamed sources. It was presented as an "experiment with artificial traffic jams" and was drowned in a deluge of criticism from multiple stakeholder groups.

The most harsh criticism came from opposing party Magyar Democratic Forum, which gave the city mayor the "birka díj" (dork award) for raising such an "absurd and laughable" idea.

The Hungarian Auto Club argued that it made no sense to create artificial traffic jams without providing adequate transport alternatives. A sustainable transport NGO, VEKE, chimed in with a similar message.

The deputy mayor who had championed the idea submitted it for a hearing at the City Council but it was voted down.

The main lesson from this failed proposal was that a focus on negative aspects of road space allocation does not sell. Some recommendations offered during a Budapest public forum shortly afterwards (Ignite Budapest, May 2009) were: