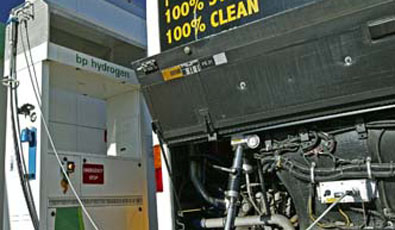 From 2004 to 2007 three hydrogen-powered fuel cell buses, known as EcoBuses, were trialled in the Perth, Western Australia public transport fleet. Hydrogen production, refuelling and support systems were also constructed to support the trial. The buses were placed on normal public transport routes and data was collected against a range of performance measures including reliability, efficiency, and public acceptance. Analyses of environmental impacts and costs were also undertaken.

The bus services in Perth are operated by three companies, which are contracted with the Public Transport Authority, Government of Western Australia, under the Transperth brand name. This arrangement has been in place since 1996. In Perth over 11,200 timetabled bus services, 1,000 train services and nearly 400 school bus services operates on a typical weekday. The companies have a fleet of over 1,100 buses, 222 rail cars and two ferries.

The objectives of the trial were to:

The Perth trial was run in association with similar trials in Europe, under the banner of the Clean Urban Transport for Europe (CUTE) project, and in Iceland (ECTOS). The trial was initially planned to run for two years but was subsequently extended for a third year. The extension operated in association with the European HyFLEET:CUTE program.

The operational performance of the EcoBuses exceeded expectations. The trial has, however, also highlighted the challenges faced by hydrogen and fuel cells if they are to become a commonly used source of public transport energy. These include:

Information collected during this trial has, through the CUTE and HyFLEET:CUTE partnerships, assisted bus and fuel cell engine manufacturers to further develop fuel cell technology. For example, Daimler and other fuel cell bus suppliers are considering several improvements for the next generation of hydrogen fuel cell buses which could offer efficiency gains in the order of 50% over the EcoBuses used in the Perth trial.

Addressing the challenges associated with hydrogen fuelled fleet based transport will be a huge task. The State Government in Western Australian has taken the lessons learnt from the EcoBus trial and is currently exploring opportunities for a trial of next generation fuel cell buses. In pursuing this, Western Australia aims to continue contributing to global efforts to address hydrogen related challenges, and ensure a sustainable transport energy future.

Further more detailed information can be found at www.dpi.wa.gov.au/ecobus and in the attached documents.