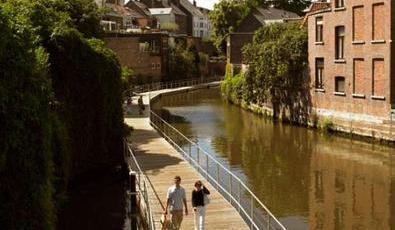 In recent years, the city of Mechelen has introduced a range of pedestrian improvements which has transformed the city into a much more pedestrian-friendly place to live and visit. Most uniquely it is a place where it is possible to ‘walk on water’.

Mechelen is a Flemish city with 80 000 people. The city lies on the major urban and industrial axis Brussels-Antwerp, approximately 25km from each city. The city hosts an important rail hub that provides immediate access to the bus network, which serves the urban area and several regional lines. After a period of steady increase in car-use in the city, there has been a slow but steady shift towards reinventing the city as a place where sustainable travel alternatives are becoming more common. Making the city both attractive and functional for pedestrians has been a central goal in this change. In raising standards for pedestrians, strengthening the relation with water has played a special role.

In the last two decades, many successful city initiatives have been introduced, including;

Although not always solely aimed at pedestrians, these measures often greatly enhanced the walking experience in the city. However, it was the combination of water and walking that has had the greatest impact on making the city attractive to walk in again. The changes in the city in favour of the pedestrians have been the result of three main diverse collaborations - Spatial Planning, Mobility, and the Public Domain city departments; Tourism and Communication organisations; and Waterways & Zeekanaal (The Flemish Ministry of Mobility and Public Works).

The first phase of construction of a floating pedestrian esplanade on the left bank of the river Dijle began in late 2005. A year later, the floating walkway was officially opened, although the final phase was only completed in 2010. Now, a footpath runs on the river from east to west across the city. The walkway is located between the city’s marina and the downtown area, creating a wooden water promenade for pedestrians, tourists and commuters. The scheme includes:

The connection to the shore is guaranteed by self-sloping staircase, the steps of which adjust the water level. Custom gradients have also been introduced for wheelchair users. In total, Mechelen invested € 0.5m in the construction of the path. The construction of a floating walkway was realised as part of an INTERREG IIIB project called Beleef het Water (Experience the Water).

In recent years many Mechelen city streets and squares have been reconstructed or made car-free. A sidewalk program was set up where every year several kilometres of sidewalks are rebuilt. There are further plans to expand the car-free zone throughout the city centre, which is estimated would reduce car traffic further by 20 per cent.

Although many other cities are introducing similar measures, crucial for Mechelen was the special attention that was given to the city’s main historic artery, the river Dijle. The water walkway as well as an extra pedestrian/cycling bridge on the river has become a success, which significantly enhanced the mobility of pedestrians (and cyclists, to a lesser extent) in the city’s historic centre. This promenade project is part of a bigger ‘puzzle’, with both infrastructural and promotional activities. Yet the combined focus of pedestrianisation and appreciation for the river has generated a project that eventually became an important link in a chain of plans and projects to the make the city exciting and dynamic again.

The river path along with the bridge and nearby urban renewal project received the Flemish government 'Home in the City' prize for the reintegration of lost neighbourhoods. In addition, Mechelen was winner of the 'Good-on-its-way' trophy that is awarded by Komimo (the Flemish umbrella organisation for environment and mobility) for exceptional contributions towards a car-free city.