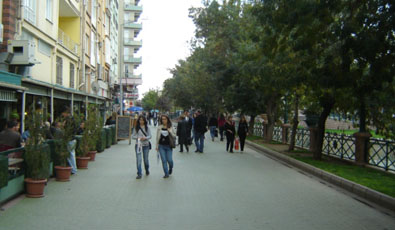 Eskisehir is a rare example of a Turkish city that has opted for something other than the building of more roads, flyovers and junctions to allow more through traffic in the bid to remedy its traffic problems. Since the late 1990s the city has followed a more sustainable route in this regard, undergoing somewhat of a rebirth as a tram city with a pedestrian-friendly city centre.

Eskisehir is just one of several cities in Turkey that have built urban rail systems in recent years; however the city stands out as the only one that has made parallel efforts to increase the number of pedestrian areas in the city.

The reduction of road capacities to increase pedestrian areas is an extremely under-utilised transport strategy in Turkey, as many local governments believe that restrictions on traffic access may have a negative effect on local businesses. Bucking the trend, Eskisehir has engaged in recent projects to transform a number of its main roads in the city centre into tram-only or pedestrian-only corridors. The pedestrianisation and street tram schemes were introduced in Eskisehir in the Transportation Master Plan of the early 2000s.

The main city centre corridor is now open only to pedestrians and the street tram; while the streets running along the banks of the rehabilitated Porsuk River have also been closed to motorised traffic and given a facelift with new street furniture. As a result, these streets have rapidly transformed into areas for leisure with the opening of several cafes and restaurants, radically altering the face of the city centre.

Both the tram-only corridor and the riverside pedestrian streets have become major destinations in Eskisehir, attracting shoppers, tourists and students from the two highly populated universities in the city. The project is an excellent showcase of how pedestrianisation schemes can revitalise a city centre and can actually be good for local businesses.

The Transportation Master Plan proposed a comprehensive pedestrianisation scheme for the city centre, only part of which has been implemented to date. Considering the positive effect of the initial phases it is expected that further programmes to increase pedestrian areas in Eskisehir will be forthcoming.