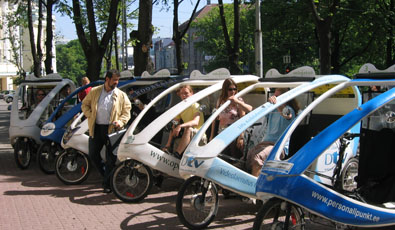 In May, 2004, a small fleet of pedal-powered taxis was introduced in Tallin, Estonia, to serve both tourists and local citizens.

The taxi fleet is operated by a small Estonian private firm, Velotakso OÜ and origionaly consisted of seven vehicles. Unlike traditional taxis, the pedal-powered vehicles are emmission free and do not create additional environmental problems associated with vibration, dust and noise. Each vehicle cost approximately 8,000 euros and originate from a Berlin-based manufacturer. To recurporate costs, each vehicle carries advertisments from local buisnesses.

Initially, the City Government were reluctant to allow the vehicles to be introduced (i.e. too hi-tec and modern and would not fit in with the old city image) although, have now accepted the environmental benefits and pro-environmental image given to the city.>Currently, the taxi fleet is available to tourists and locals from May to October, either on scheduled routes, or at events like corporate celebrations, sports, fairs or congresses.

Despite initial opposition, the introduction of the enviro-taxis has proved to be a success. The most important influence of the vehicles is making citizens and tourist more environmentally aware and more sensitive with the need to protect the urban environment, architectural and cultural heritages of the city. The are plans to extend both the taxi fleet and routes offered and it is hoped locals will also make use of the taxi services.