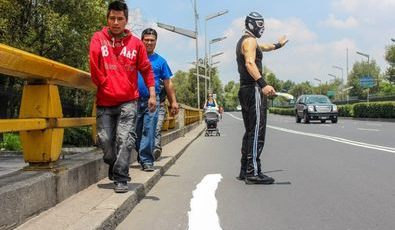 Mexico City is unfortunately (still) known for high air pollution levels, traffic congestion and frequent road fatalities. However the car-centred policy and culture is transforming. This transformation includes an increased focus on pedestrians. In the summer of 2012 a new, masked superhero even stood up to fight for their rights.

Mexico City has a population of almost 9 million people. The larger metropolitan area contains over 21 million people. Millions of city residents commute to and from work, spending an average of over of 2 hours travelling a day. The city holds the largest metro system in Latin America, transporting almost 4.5 million people every day. It also hosts a network of buses and rapid transit lines, in addition to privately operated microbuses. However, car traffic is dominant. Motorised traffic was so dense that an elevated highway was constructed in 2003. An environmental program called ‘Hoy No Circula’, whereby only vehicles with certain ending numbers on their license plates are allowed to circulate, was installed in an attempt to cut down on pollution and traffic congestion.

In this context, road traffic injuries in general and pedestrian injuries in particular are a major health problem in the city. A study (Hijar, M, Vasquez-Vela, E and Arreola-Risa C,) revealed that 54% of deaths due to traffic accidents in Mexico City were adult pedestrians. An estimated 9500 pedestrians are injured each year with a ratio of 13 non-fatal injuries to every death. In the light of this, a new hero emerged in the summer of 2012, aiming to stand up for and save pedestrians.

Peatónito is a ‘luchador’, a lucha libre wrestler. Lucha libre, or Mexican wrestling, is characterised by colorful masks and rapid sequences of holds and manoeuvres. This wrestler does not fight for glory in the ring however; he fights for public and governmental support in favour of pedestrians. His leading message is that walking is an ideal form of transportation in a city as dense as Mexico City. It takes up less space; it does not pollute and it provides a healthy form of daily exercise. The message is that walking should be more important in Mexico City mobility policy.

On the streets, Peatónito is a conscience incarnate. His mask echoes the colours of a pedestrian crossing.>In a playful and fun way, this superhero raises awareness among pedestrians and motorists. The masked character employs several tactics in order to combat the hostile circumstances that pedestrians face. One is confronting motorists when they invade pedestrian crossings or footpaths, by pushing them out of the pedestrian zone. Another is marking with white paint crossings that do not yet exist, at intersections that need them. But the problem is not only motorised traffic. Another example is to remove obstacles from sidewalks and to negotiate with street vendors to ensure there is enough space for pedestrians and wheelchair users.

It is only fair to say that Mexico City is moving forward towards realising a more sustainable transportation policy. In recent years, changes and improvements in respect of quality and availability of public transportation (e.g. Metrobús), of lowering the number of vehicles in circulation (e.g. Programa de Transporte Escolar, Hoy No Circula) and of promoting non-motorised means of transportation (e.g. Ecobici bicycle sharing program) have grown. An almost symbolic measure has been the pedestrianisation of some streets in the historic downtown (Regina Street, Madero Street).

However, decades of car-centred strategies make it difficult to move towards more sustainable mobility patterns. This is why the actions of Peatónito are important and inspiring. As a local superhero, he presents a friendly character to inspire people to change their habits and behaviour. In a city of millions this is a big challenge but his actions, and the support for them, strengthen the position of the pedestrian as a key aspect of the mobility agenda. Through the dissemination of information via public performances and social networks, this superhero has become an active stakeholder.

The approach can be adapted to other contexts and urban cultures. Maybe your city needs a person who decides to dress up and get out there to fight for justice for the pedestrian in a friendly and peaceful way! Actions like Peatónito's fortify a new road culture which respects soft modes. They reclaim the streets for pedestrians and help to make a car-free lifestyle more trendy in Mexico City. I bet Gotham City is next on our hero’s list!