Paying by SMS for parking in the enlarged Blue Zone in Sofia. Bulgaria 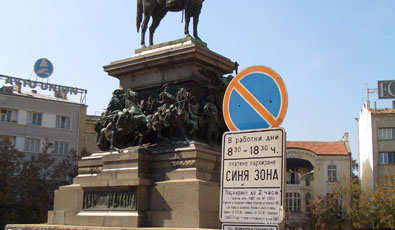 Fighting against trafic cogestions and trying to facilitate parking in the city center, the Municipality of Sofia are taking a series of measures. They include the enlargement of the Blue Zone and implementation of a new payment system, based on modern ICT.

In the last years the Bulgarian capital Sofia is suffering not only from huge traffic congestions, but also from an acute shortage of parking places. This problem is a consequence of the dramatic increase of the car number which is already exceeding 660 000. It corresponds to a ratio 550 cars per 1000 habitants. Since the city infrastructure did not considerably improve in the last 30 years, the difficulties which the road transport in the city is facing, are very serious. Under these circumstances the local authorities are not only working on important infrastructure projects, but are also looking for short terms solutions of the parking problems. One such initiative was the enlargement of the Blue Zone in the city center and the implementation of a new payment system.

In order to provide with more possibilities to park in the city center, in 2005 the local administration started to enlarge the Blue Zone which in October 2007 covered 9000 parking places. By the end of 2008 this number should reach 10400. Until July 2008 the payment for parking in the Blue Zone could be carried out only by talons, available in some kiosks, or sold on the large parking places by control officers. At the present time it is also possible to pay by SMS using the number 1302.>This service has been supported first by the two largest mobile phone operators - M-tel and Globul - and later on - by the third one - vivatel. The price for one hour parking in the Zone is 2 BGN (1,0 EURO). After sending the SMS, the car driver receive a confirmation message and short before the deadline expiring - a reminder. There is a possibility to pay for another hour parking time, sending a new SMS.
Unlike the extension of the Blue Zone which raised controversial reactions, the new payment system has been accepted very well. According to the municipality statistics about 800 parking places per day are paid by SMS and this number continue to grow up.
It August 2008 it has been announced that a new possibility will be offered to pay by phone. The driver can use the same SMS number, but should dictate the car number to an operator.
The Municipality of Sofia is foreseeing to replace the existing Blue Zone by a City center access taxes. However, it should be introduced only in 2009-2010 when the extension of the main Sofia Metro line will be finished.

Although the enlargement of the Blue Zone in Sofia was considered as controversial measure, it has a positive effect and contributes to solving the parking problem in the Sofia city centre. The new system for payment has proved its efficiency and is becoming popular among the car drivers parking in the Blue Zone.