Paying for Parking by Phone in Cork/Ireland 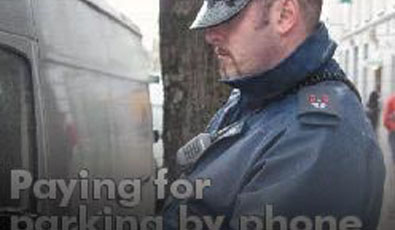 On Sept. 2004 the Final System Design of the new parking payment system was completed in Cork. Parking payment was implemented by Mobile Phone and the user might be informed of traffic restrictions, sustainable mode choices and reminders when their parking time is nearly up. Radio and Newspaper publicity helped encouraging the public to register.

It was decided to implement parking payment by Mobile Phone. Members of the public should be able to subscribe to this phone information parking system by registering via post or internet. The system administrator could then send a selection of pre-programmed messages to the subscriber. For example, the user might be informed of traffic restrictions, more sustainable mode choices or reminders when their parking time is nearly up.

Information about the availability of Multi-Storey Car Park spaces was already available on the Urban Traffic Control System (to operate the Parking Guidance Signs). This information could also be made available to the proposed parking service users.

The use of wireless technology would also mean that rugged hand held devices could be used to automatically relay information about illegally parked vehicles to a central server. This data could be integrated with databases of subscribers/parking offenders, fines payment notification systems etc. to make prosecutions fairer and more efficient.

In May 2002, pre-qualification notices to tender were published on the Irish government’s ‘e-tenders site’ and in the EU Official Journal using the Restricted Tender Procedures. The process of qualification was completed by mid-August and by December tender documents were issued.

Approval was then obtained from the City Council in March 2003, to proceed to contract stage with one tenderer. The training phase then commenced in Spring 2003, when all traffic wardens and their supervisors were given a demonstration of how the new system would operate. Unexpected legal matters further prolonged the Park-byphone contract negotiation process. As soon as these were resolved, it was possible for the contract to be signed, in December 2003.

There were also delays in obtaining the rugged handheld devices units, configuring IT systems to process the signal output (i.e. the Final System Description) and in negotiating terms and conditions of employment for new working procedures. However, administration software for processing information received from the handhelds, was installed on the 5th of August, 2004. The Final System Design for the parking payment system was completed a few weeks later. Then the customised warden handhelds were delivered and a preferred supplier for the tickets was identified. After that, the wardens training resumed and the handheld pilot project was completed by the late autumn.

As the back office set up was being completed, the local parking byelaws were changed. Radio and Newspaper publicity then encouraged the public to register for the service in February. Parking Area Designation Signs were also erected in March. (These area numbers must be keyed in when paying for parking.)

CIVITAS funding helped to fund some of the project promotion initiatives, as well as the initial project design and tendering process. The registration of users and maintenance of system costs will be largely borne by the system operator. However, the City Council or other clients should be able to pay for additional services such as text messaging subscribers about Park and Ride services etc.

To assist other European cities considering the implementation of phone-based parking payment systems, copies of the Tender Documents and the ‘Parking by Mobile’ Specification were sent to CIVITAS partners for dissemination.

The system will go live in April 2005. When a critical mass of subscribers and other support has been established, additional features may be incorporated into the system. For instance, it could link to a real-time Travel Information System that Cork City Council would like to pilot in future EU projects.

In 2011 the paying for parking by phone system called ParkMagic is fully functioning in Cork and Limerick in Ireland.

More info can be found in the city of Cork website:
http://www.corkcity.ie/services/roadstransportation/trafficdivision/parkbyphone/