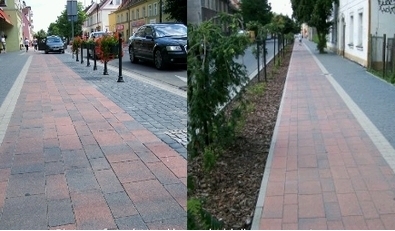 In 2012, the city of Nowa Sól ordered a new bike lane and pavement with paving stones made of ecological cement that absorbs harmful nitrogen oxide from car exhaust. The town is the first place in Poland to use this new technology.

The town of Nowa Sól is located on the Oder River in western Poland and has a population of 40,000. Despite having a ring road around the town, there are several transit routes crossing from south to north and from east to west, which experiences heavy vehicle traffic. Many residents of Nowa Sól use the bicycle as an everyday mean of transport and there are more and more new cycle paths, most of them from new investment.

In order to reduce environmental pollution caused by the vehicles passing through the city, its authorities decided to use modern technology in the construction of the bike lane and pavements in one of the streets in the city centre. An eco-friendly cement has been selected for the construction in order to neutralise pollutants.

The bike path and pavement were built in Witos Street in the centre of Nowa Sól. The experimental surface of both the pavement and the path was composed of cubes comprising a total area of 6 thousand square metres.

The secret of the investment is the innovative, technologically-advanced cement, which contains titanium dioxide as a photo catalyst. Nanoparticles of titanium dioxide are also applied to the concrete surface.

The cubes react to the sun's rays by the forming of free radicals, catching and neutralising pollutants. The concrete surface therefore reduces the concentration of harmful nitrogen oxides from exhaust fumes. Additionally, this surface can clean itself of all organic compounds. The contaminants are broken down into smaller parts and then flushed away by rain.

According to the calculations of the cube’s manufacturer, the 8-millimetre thick surface coating neutralises 25 percent of all air pollution caused by cars and should last for about 40 years. The building cost of the green bicycle lane and pavement amounted to the equivalent of about €400,000.

The environmental investment in Nowa Sól contributed to less noticeable air pollution in the area and was not very expensive. One square metre of this type of surface costs about €40, which is only about 15-20 percent more than conventional paving.

The cycling comfort of the environmental bike lane surface is also much higher compared to a cobbled pavement, and similar to that of an asphalt surface.

The technology is applicable to almost all concrete surfaces such as pavements, noise barriers, facades of buildings and tunnels. Equipped surfaces can clean themselves and provided a proper level of sunlight reduce air pollution.