Participatory planning and promotion of sustainable mobility in Ljubljana. Slovenia 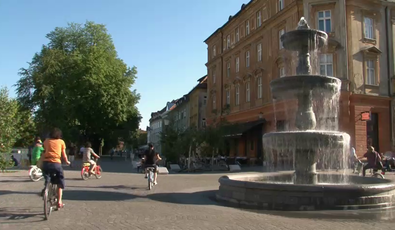 In 2007 a website was established to provide employers with the information on how to set up a travel plan, encouraging their staff to use sustainable transport.

In Ljubljana, public awareness about the use of sustainable transport modes was increased by means of a participatory planning scheme.

Ljubljana, Slovenia’s capital, today has a population of around 280,000 inhabitants in the city and the same again in the surrounding region. With the modernization of the country and construction of a very dense motorway network for a country of its size, car traffic has increased very significantly, forcing the city to react.

A scheme to promote and encourage the active engagement and participation of the city's people in mobility planning and scheme implementation was set up. Initiated by CIVITAS MOBILIS, the concept relies on public participation in order to create a feeling of social responsibility to promote the choice of more sustainable modes of transport.

Prior to the project Ljubljana was lacking a coordinated approach involving multiple organisations to promote sustainable transport and in particular, cycling. The lack of motivation among the population to cycle and people's use of sustainable transport more widely needed to be enhanced.

At first the scheme mainly focused on promoting sustainable mobility in Ljubljana, especially increasing the use of bicycles. The cycling infrastructure was improved up to a suitable standard and covered bicycle shelters were installed through the participation of the local cycling association. Public transport was also assessed and key public stakeholders were identified. Focusing on the idea of participatory development, district city council representatives, people from local self-government and the general public all worked jointly. Schemes that resulted from this plan were the implementation and large scale deployment of bio-diesel and CNG fleets in the city. Simultaneously a model for public participation was developed and evaluated.

The participatory planning and promotion of sustainable mobility in Ljubljana has achieved the result that citizens are now better informed about sustainable transport and their active involvement has risen. Additionally the city has implemented measures to increase cycling as well as cleaner vehicle fleets and new bicycle shelters have been erected in prime cycling locations. In order to monitor the progress of implementation and public reaction to it, consultations continue to be carried out.