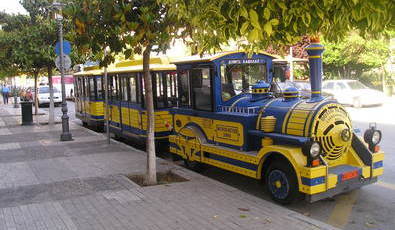 A small train on tyres tours the Panagia peninsula in Kavala's historical city centre providing free transport for tourists visiting the major ottoman and byzantine sites. The service is also used by residents (usually the elderly) as a means of everyday transport to the new city centre.

The main reasons for the introduction of the small train route in Panagia region were :

The target population was : The region's inhabitants and visitors to the city

METHODOLOGY
The implementation of the intervention was empirical. A small train vehicle, the same as the one that was to be bought, was tested on the proposed route in order to make sure that it was suitable for the job.