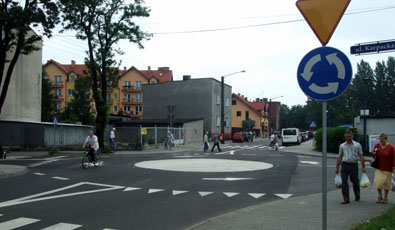 In 2006 the municipality of Chorzów has installed an experimental mini-roundabout with painted horizontal multilayered marks instead of a paved raised traffic island. Compliance rate and acceptance have been found to be comparable to conventional mini roundabouts but at one-third of total implementation costs.

In process of repairing and renewing of city streets in Chorzów, situated in south of Poland, emerged a new idea - to convert a small conventional junction into an experimental roundabout. A mini-roundabout with horizontal multilayered marks instead of roundabout with paved raised traffic island has been developed and constructed.The objective of the activity was to improve safety and calm of the traffic within the small-sized existing junction, keeping it suitable for trucks and buses. Because of dense premises and financial lack, neither the conventional mini-roundabout nor junction with light signalling could be build.The safety of the traffic in the junction was insufficient since the adjacent roadways have been repaired, allowing to pass junctions at higher speed. Also the dominating movement in the junction (left-turn from the subordinated roadway and directly running with precedence) caused this junction to be unsafe.

The experimental mini-roundabout has been constructed using a structural multilayered technology. The middle island border has been indicated by on-roadway reflecting elements, improving the night visibility. Also the direction arrows on the driving lane of the roundabout and the dividing islands on the entrances have been painted. Warning signs before the junction are identically to any conventional- or mini-roundabout>The implementation of rotary traffic by the help of a painted middle traffic island was possible off-hand, without any obstacles specific for building of the paved raised island, such as reorganizing of public and individual transportation (bypass, relocation of stops) or rebuilding of the underground structure.