Oulu – The winter cycling capital of the world. Finland 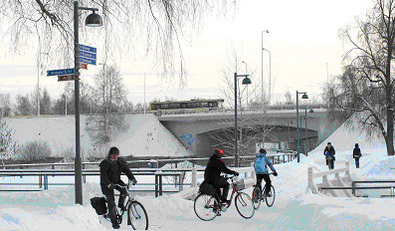 The City of Oulu (190 000 inhabitants) is the cycling capital of Finland and the winter cycling capital of the world. It has one of the most extensive bicycling networks (613 km, 4.3 m/inhab.) in the world, a cycling modal split of 22 % (2009 data) and state of the art winter maintenance levels.

The existing cycling infrastructure and cycling culture in Oulu has been created over a prolonged period of time. The first bicycle plan was made in the early 1970’s and was implemented by 1982. Ever since the city of Oulu has constructed an average of 17 km bicycle paths/ year. Thanks to this long term dedicated work, cycling has become an essential element in land use and traffic planning procedures. Due to the history the residents of Oulu find cycling a normal mode of transportation, even in harsh winter conditions - Even elderly people cycle during wintertime.

Recently the City of Oulu has started new projects in order to promote year round cycling even more. The winter cycling rates drop to 33 % from the top summer months’ figures, and at a general level the City has noticed that the cycling modal share has been descending in recent years.

The winter cycling 'miracle' of Oulu has its roots deep in history. Besides the normal planning procedures within the city, there are important milestones that have helped Oulu to become the best winter cycling city in the world, namely:

The continuous work from the 1970’s has produced the most extensive separated cycling network per inhabitant in the world. The whole network is maintained during winter, and winter maintenance of bicycle paths is even prioritised over streets.

The City of Oulu is divided into 9 maintenance contract areas. Five areas are maintained by private contractors with 4 year long contracts. Tendering documents have been developed during the tendering rounds and have been widely exploited by other Finnish cities. The customer satisfaction in winter maintenance of bicycle ways tops the national surveys year after year.

Oulu region cycling strategy (2007) defined the most important bicycle routes on regional and municipal level and their connection defects. One outcome of the regional plan is the cycling path connection to Oulu airport which enables new opportunities for growth in the cycling tourism market. The Oulu region covers nearly 1,000 km of separated bicycle paths.

Cycling throughout the year is now considered as a normal thing in Oulu due to the long-term, dedicated work of the City of Oulu. The citizens take these top level cycling conditions for granted even in such extend that winter cycling is not regarded as anything special. Oulu has a lot to offer for cities struggling in similar weather conditions in year round cycling promotion.

Read more at: http://www.oulunliikenne.fi/palvelut/julkaisut (Finish only)