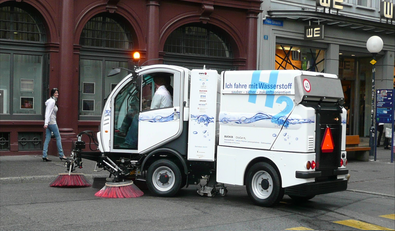 In the joint project hy.muve (Hydrogen driven municipal vehicle), a hydrogen-powered sweeper was produced. The project was initiated by the EMPA, an interdisciplinary research and services institution for material sciences and technology development, and the Paul Scherrer Institute.

The combination of renewably produced hydrogen - which is carbon-free and does not involve consumption of finite resources - and vehicle propulsion based on a fuel cell with high efficiency is technically difficult and connected to various conversions (e.g. security, refueling). On the other hand it offers great opportunities to test the capabilities and opportunities of these innovations under real world conditions, especially in a local area. In the hy.muve project a compact sweeper was developed with hydrogen propulsion, and then tested for 18 months in various Swiss cities. Socio-economic studies are also being conducted to develop a market strategy for hydrogen power in Switzerland.

Project partners include the EMPA, the Paul Scherrer Institute, the Competence Center for Energy and Mobility in the ETH Domain (CCEM), the municipal vehicle manufacturer Bucher Schörling, the electric drive manufacturers BRUSA Elektronik ltd., the refueling station manufacturers and hydrogen suppliers Messer Switzerland ltd. and the energy and environmental agencies of the canton of Basel city and Novatlantis - Sustainability at the ETH Domain, the city of St. Gallen and the Swiss Federal Office of energy.

The 55 kW diesel engine and hydraulic drive were replaced by a 20 kW fuel cell system with a 12 kWh lithium-polymer battery, electric drive and a 7.5 kg H2 storage system. The fuel cell / battery hybrid drive enables a steady operation of the fuel cells compared to a pure fuel cell drive. This has a positive effect on the duration of the fuel cell system. The electric motors used are three-phase alternating current synchronous machines with a modern frequency converter and a common 300 V direct current power supply. The driving force of release transferred in the drive and power supply from the fuel cell is controlled by the state of the polymer lithium-performance batteries. On average the drive engine uses just 15 percent of the generated electricity from the fuel cell. The majority of energy - about 45 percent - will be used by aspirator; about one-third is consumed by the hydraulic auxiliary units that drive the various sweepers.>Auxiliary systems such as cooling and lighting consume almost 10 percent of the useful energy.
However, there have been various problems in the initial test phase. This was triggered mainly by the pressure regulator of the fuel supply, the air intake system, the monitoring device and the air compressor for the fuel cell at low temperatures. The fuel cell system was therefore revised and subjected to re-testing.

Rough estimations have shown that vehicles like this are about twice as expensive as a conventional diesel hydraulically driven vehicle when built in a small series. If built in larger numbers (e.g. 100 units per year), the additional costs could drop to about 50%. The operating costs are lower. The hydrogen is slightly more expensive per kWh than diesel petrol, but only half as much is needed.

The simulation of a normal operation shows that the hy.muve project vehicle reaches a 50% reduction in energy consumption compared to current diesel engines (tank-to-wheel). During testing, the vehicle consumed on average 0.5 kilograms of hydrogen per hour, which corresponds to the energy of about 1.7 litres diesel per hour (about half the energy consumption of conventional sweepers). The CO2 reduction depends on the hydrogen supply. Even if today's hydrogen production from natural gas is taken into account, the CO2 emissions of a hy.muve-vehicle in a well-to-wheel approach are 30% lower than the current diesel engines. Additional research relating to municipal vehicles is planned because the benefits of hydrogen-powered fuel cell vehicles are obvious: no local emissions and high efficiency. Since hydrogen stations are scarce, this powertrain technology is currently used primarily in locally operated specialty vehicles and buses. The project also helps to resolve technical and non-technical issues for hydrogen power like operating capability, ageing behavior, efficiency, technical complexity and costs, but also acceptance by operating personnel and the public.