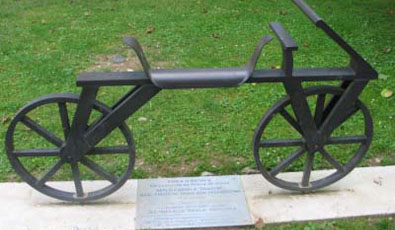 After many decades of marginalization the bicycle is celebrating its come back all over the world. In Koprivnica, Croatia not only as the smartest product of human ingenuity but also as a piece of art.

Bicycles used to be the most popular means of travel in 1950s. Over the following decades, the car revolution has changed not only the way of travelling, but the way of life for millions of people all over the world. Providing fast, comfortable and attractive transport, motor vehicles quickly became status symbols and almost compulsory personal possessions. The modest bicycle - fast, practical, reliable, environmentally friendly and physically stimulating- was mercilessly pushed to the edge of the road, its rider considered as either lacking income or common sense. It needed a come-back, either in the form of reasonable argument, proclaiming it once again the ideal means of transport in our crowded and polluted cities, or - as in the case of Koprivnica,Croatia - as not only one of the smartest products of human ingenuity but also a beautiful artefact. The idea of open-air bicycle museum seemed like a compromising solution.

The members of the Old timer club „The Bicycle“ like cycling for recreation, but they also collect and study old bicycles, owning a fleet of over seventy specimens, all of which are more than 30 years old. Riding requires an adequate set of clothes, so the club members all wear well-tailored 1930s costumes when engaged in one of the numerous cycling events they organize. On May 1, 2005, they erected the first monument to the bicycle, a modern display of metal circles in the central town square. The public reacted very positively and the monument soon became the favourite town sight.
The more ambitious project followed:“The bicycle - from Leonardo Da Vinci to our time“
In the course of two years, seven replicas of most famous models of bicycle through the history were diplayed in the streets surrounding the central town square and following the route of 1950s annual town cycling race, very popular at the time.
Since 4 November 2008, all seven replicas adorn their appropriate plots. The first one is the realization of Leonardo da Vinci's design of the bicycle from 1515. The replica of Dreis von Sauerbronn's „draisine“ followed, as well as Mc Millian's model from 1839. The next replica presents „the Velociped“ ( or penny farthing) from 1861, probably the most amazing idea of the bicycle. The three most recent additions are closer to our time: the so-called „Safe bicycle", produced by J.K. Starley in 1900., the female bicycle model „Steyer“ from 1930. and the Mountain bike from 1980s as the most popular recent invention.

Most daily and weekly newspapers offer numerous pages of flashy motorcar advertisements. Old timer cars also have a great appeal. The bicycle, a desirable solution of so many problems of urban traffic, requires the same respectful treatment as one of the ways to change the attitude of public towards its numerous advantages. Koprivnica's unique open-air bicycle museum offers one of the possibilities.