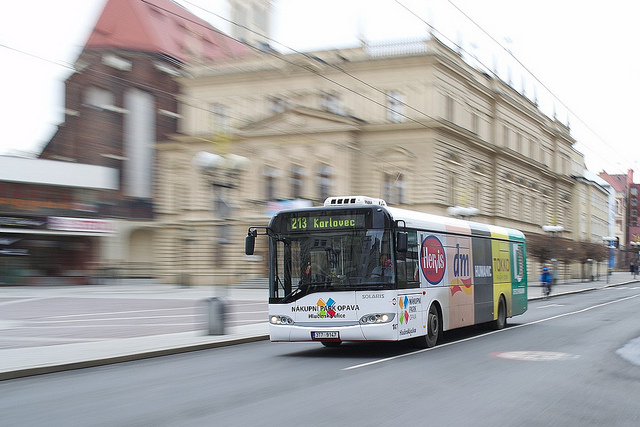 Cities in the Czech Republic are facing a number of urban transport problems. Public transport use is decreasing, the number of cars is rising and bicycle networks are lacking.

In October 2013 Opava began preparing a Sustainable Urban Mobility Plan (SUMP) to address these issues. Thanks to the involvement of stakeholders and citizens, the final plan – adopted in June 2015 – has received much support and is set to help Opava develop safer, cleaner and more efficient urban mobility.

Opava, a city of 60 000 people, is situated in the north of the Czech Republic. It has a dense local public transport  network with  14 bus lines and 11 trolleybus lines  which are operated  by local transport operator Městský Dopravní Podnik Opava (MDPO).

Thirty-four per cent of citizens use a car; 31 per cent walk; 24 per cent travel on public transport; and 11 per cent cycle. Public transport use is in decline:  in 2014 MDPO transported about 10.4 million passengers, down from 11.8 million in 2011. At the same time car owner ship and use is increasing, bringing with it more congestion in the city centre and related noise and pollution problems.

In addition, Opava faces parking problems caused by the parking demand of high-rise buildings  and an increasing  number of commuters using the car; the lack of a safe, integrated bicycle network; and unsafe crossings for pedestrians.

In October 2013 Opava started preparing its SUMP and contracted a consortium to cover all of the fields of expertise required. This included partners responsible for project management, communication, transport modelling and engineering, and environmental aspects. The total costs of the contract were 4.78 million CZK (about €  177 000), of which 85 per cent was co-funded by the European Regional Development Fund.

The EU SUMP Guidelines were used to inform and inspire the SUMP process in Opava. From the beginning through to the end citizens were informed and involved through public meetings and the project website. The plan was developed in three phases, and before the end of each phase citizens could submit their views on the draft documents at a public meeting as well as through the project website.

In this first phase (steps 1 and 2 from the SUMP Guidelines) a strategic document was drafted in which the vison, objectives and indictors were defined and related policies and strategies were identified.  A communication plan setting out plans for citizen and stakeholder participation was also drafted in this phase.

The second phase (SUMP Guidelines steps 3 and 5) provided the basis for the design part of the plan. It consisted of an analysis of the current urban transport system and a SWOT analysis, and forecasts  and assessments of socio-economic, and transport and mobility developments.

This last phase (SUMP Guidelines steps 6 to 10) consisted of the development of an integrated package of measures, including the assignment  of responsibilities, funding  and implementation.

The main result of this project is a sound and feasible SUMP prepared within 22 months. It was adopted by the municipality in June 2015. Thanks to the involvement of citizens and stakeholders throughout the whole project, the SUMP has broad support.

The plan contains a long-term vision on the development of the city that will meet the mobility needs of citizens and businesses in a sustainable way to 2020. As part of this, three scenarios were proposed: Optimistic – which envisaged and reduction in car use to 20 per cent; Medium – where car-use is 33 per cent; and Low - 40 per cent car-use.

Based on its available finances, Opava chose the Medium scenario and developed a related package of 19 logical measures or activities. These focused  on safe cycling; safe streets and crossings; parking regulation; the promotion of public  transport; and Mobility Management.

The total costs for the implementation of the measures by 2020 are expected to be 224 million CZK (€ 8.27 million) - of which about 53 million CZK (€ 1.95 million) is financed by the municipality and 60 million CZK (€ 2.21 million) by subsidies from the EU’s Integrated Regional Operational Programme structural funds  or the State Fund for Transport Infrastructure.

Municipality funding of 112 million CZK (€ 4.13 million) is reserved for co-financing city bypasses, the realisation of which will take place over the next five years.

As the implementation of the SUMP progresses in the next few years, Opava aims to keep citizens involved by allowing them to choose two core transport topics to be publicly discussed each year.

The successful development of Opava’s SUMP is a very good example of the usefulness and applicability of the EU’s SUMP concept and process.

The whole project and process (including news, discussions, related paperwork, and stakeholder involvement) is very well documented on the project website.

In addition to being available for Opava citizens and stakeholders, these resources are also for anybody looking  for a good example  of SUMP development.

Petr Macejka, from transport planners UDIMO – one of the partners involved in the project -  said:  ‘When preparing the mobility plan we built on the existing tradition of transport planning in the Czech Republic, and used new knowledge from the EU SUMP Guidelines and the best practices from cities like Liverpool, Washington and others. This proved to be very fruitful.’