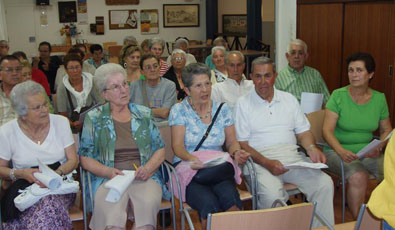 Road safety education is probably one of the failed subjects of our society. Most of the people ignore quite usually lot of the rules that should be known in order to avoid common accidents. This reason, among others, was the cause to organise some workshop related to this matter for old people of Donostia- San Sebastián. The principal aim of this activity was the improvement of road safety and, at the same time, the encouragement of the use of non-motorised modes.

Due to the lack of knowledge of road safety rules, Donostia- San Sebastián city decided to implement this activity as part of its programme inside AENEAS project. This is one of the measures the city adopted, being all of them specifically aimed at senior citizens. It involved the design and implement of an educational programme on road safety, as well as the organisation of an information campaign on road safety. Furthermore, it intended to detect black spots in older people traffic and propose a variety of measures to reduce the number of accidents at these locations. On the other hand, it was also established a monitoring and evaluation system on risk of accidents among old people.

The achievement of this workshop was possible due to the collaboration of different stakeholders. On the one hand, (RACVN, Drivers’ association of th Basque Contry) took part in the activity providing the instructor as well as the teaching material for being used. The police of Donostia- San Sebastián also support the workshop and, in fact, one policewoman participated giving useful information and sharing with all the participants her own experiences about most common road safety problems in the city. On the other hand, the City Council took part in the activity too and one technician of the Mobility Department attended the workshops.As it has been already said, this workshop was especially targeted at senior citizen, and was divided in three different parts:1. Instruction about AENEAS programme and main objectives2. Instruction about road safety3. Practical workshop about what it had been learntThe activity started with an informative talk about AENEAS programme. All the participants were informed about the principal characteristics and aims of this European project. Donostia- San Sebastián is one of the participating cities and, therefore, there were explained the main activities and objectives of the city inside this project>One instructor of the RACVN was the person in charge of giving all the explanation as well as the informative material.After the talk, a presentation was performed which consisted basically of the exhibition of a large number of pictures showing the huge infrastructure changes the cities have suffered over the last years. So senior citizens had the opportunity of watching old photos of different Spanish cities and, therefore, they were able to see how big has been this variation. The pictures showed different parts of the urban reality like vehicles, buildings, city streets, etc. both in the past and nowadays. They all showed the way they used to be comparing to the way they currently are. This part of the activity was especially welcomed because of the interest entailed on watching old historical images of the cities.Once the presentation finished, a practical workshop was carried out. All the participants were divided into different groups in order to work easily. The instructor of RACVN showed them a large variety of photos, but this time referred to common safety road errors each citizen usually make. Next, they were invited to discuss about the photos they had seen and try to find which one would be the correct behaviour for each one of them. Once they had a talk about the proposed subject, one person of each group shared with the rest of the participants the impressions they had exchanged about the pictures as well as the possible solutions they have thought for each of the suggested situations.Once the activity is finished, all the participants enjoyed a coffee- break offered in the old people house.

Old people of Donostia- San Sebastián got useful information about the rules they should respect related to road safety. In fact, they learnt a lot by a really practical way: seeing the most common road safety errors they usually make and after seeing the success it has had, offering similar activities in the near future will be continued.Having carried out this activity, the future impacts are expected to have: on the one hand, a reduction of accidents of older people and, on the other hand, an encouragement of non- motorised modes.Homepagehttp://www.aeneas-project.eu/?page=donostiaCase Study in cooperation withe ANEAS (Logo)
Topic:
Intermodality
Country:
Spain
City:
San Sebastian
Contact:
Andres Martinez
Contact:
Andres Martinez
Author:
AENEAS
Keywords: