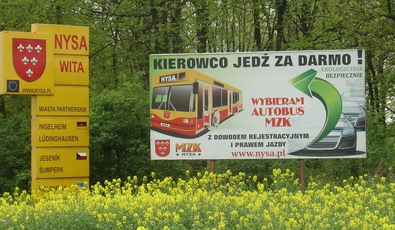 Widespread car-use and a constantly congested city centre in Nysa led it to develop a revolutionary programme where car owners can use the city’s public buses for free. Since the scheme started in May 2012, the number of cars entering the city has decreased, the amount of people using public transport is up and the air quality in the area has improved. And, as most car drivers did not buy tickets previously, the loss in earnings related to bus ticket sales has not been significant enough to be a problem for Nysa’s municipal office.
Context

Nysa is a town in south Poland with over 40 000 inhabitants (58 000 in the municipality) and 16 bus lines – 12 of which go out of the city. Nysa’s public transport company, Miejski Zakład Komunikacji (MZK), carries 2.6 million passengers every year. Nysa has been having problems with heavy traffic in the city centre. As a result, the municipal office has been strongly promoting the use of public transport.

Nysa’s bus fleet has been systematically improved since 2006, with 34 buses now in total. By the end of 2014, modern IT systems, on-board ticket machines and electronic information boards at bus stops will be installed. In addition to the traffic problems, the closure of the city’s Kościuszko Bridge, a major traffic artery, led the municipal office to think of free public transport for car drivers as a solution to help motorists while also promoting sustainable mobility.

Before deciding to implement the scheme, Nysa's municipal office underwent preparations that lasted several months. This included a consultation with local councillors, who represented citizens of Nysa, and representatives of the town’s transport company. To inform the public about the scheme, the municipal office used billboard advertising at four road entries around the city, and posters on buses and in the community, with a slogan explaining that public transport is the friendliest form of urban transport to humans and the environment. Money for the advertising campaign came from the municipal office’s budget.

‘The regional and national media were very interested in the topic of free public transport in Nysa, which also helped in the promotion of the scheme,’ said Piotr Walach, Nysa’s deputy mayor. Nysa’s municipal office decided on 19 April 2012 to allow all car drivers (including local residents, guest and tourists) to use public buses free of charge. Passengers simply show their driver’s license and car registration documents to the bus driver when boarding a bus. This was initiated in May 2012 by the Mayor of Nysa and implemented by the municipal office and the municipal department of communications. The resolution prepared by the Mayor was published in the Official Journal of the Opole Province. The duration of the scheme - which is costing the municipal office 200 000 Polish złoty (€ 48 000) to implement, and which includes funds for marketing - is indefinite.

Results
The scheme has been in effect for two years and has been working well. The air quality has improved and the noise and traffic volume in the city centre has decreased. Furthermore, free bus travelling has become increasingly popular and, according to studies, the reduced traffic has been noticeable, especially on weekends. According to the municipal office, after the regulation was introduced, the number of public transport passengers increased by an average of 79 people per day – in other words, potentially 79 fewer cars on Nysa’s streets daily. Between 26 May and 18 June 2012, Nysa’s municipal department of communications conducted the first survey on the use of city buses. The study took place over 14 days, including four Saturdays and two holidays. Around 12 124 people were surveyed. A total of 451 passengers were shown to be taking advantage of the free rides – among them 160 who had never used public transport before. All other respondents paid the standard fare.
Between 2012 and the end of 2013 another survey was conducted. This survey showed that there were over 188 000 free trips taken by passengers on public transport over that period. A further questionnaire of citizens showed that many were supportive of the measure. The loss in earnings related to bus ticket sales has not been significant enough to be a problem for the municipal office as most car drivers did not buy tickets previously. Before the introduction of the scheme, tickets brought in roughly 2.2 million Polish złoty (€ 525 000) per year. After its introduction, this figure decreased by only 100 000 Polish złoty (€ 24 000). This has not changed since 2012.
Challenges, opportunities and transferability
One of the reasons for the initiative’s success is the variety of the bus routes; besides the city, the buses serve 26 villages around Nysa. However, in view of the population size of the region, municipal officials say that it is difficult to know whether the free bus solution can be applied in bigger agglomerations with the same level of success as in Nysa. Walach believes that there should be no problems with the introduction of such a solution in cities of a similar size to Nysa. ‘In bigger cities cost of introducing such a measure will, of course, be greater. But in our opinion the benefits will be significant,’ he says.
The success of the scheme has lead to the municipal office expanding free public transport to children up to 7 years of age. Nysa also now offers a variety of discounts and benefits for travelling on public transport, which 75 per cent of passengers use. This is paid for out of the 4.5 million Polish złoty (€ 1.07m) budget the municipal office provides to its public transport company, the MZK. Nysa is now a member of a regional partnership of 17 local governments formed in July 2013 to develop four distinct local strategies as part of a 2014-2023 Municipal Development Strategy:  general; transport; labour market; and social. Thanks to its success in the promotion of sustainable mobility, Nysa is leading the transport strategy in the partnership and co-ordinates all activities related to its implementation.
In Depth
Topic:
Collective passenger transport
Mobility management
Traffic and demand management
Country:
Poland
City:
Nysa
Contact:
Piotr Walach
Author:
Annelien Venema