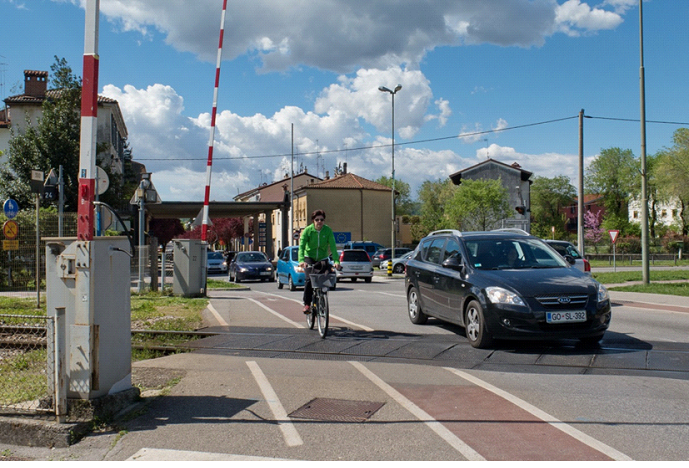 Although Slovenia has no prior experience of integrated transport planning, Nova Gorica - through applying SUMP guidelines developed with the support of the European Commission – successfully involved stakeholders and citizens to two years later produce an integrated cross-border SUMP for seven municipalities. The draft SUMP is now ready to enter the local political decision-making process.

Nova Gorica has 32 000 inhabitants and nestles the Slovenian-Italian border. Five smaller Slovenian municipalities neighbour Nova Gorica:  Renče – Vogrsko; Šempeter – Vrtojba; Kanal; Brda; and Miren – Kostanjevica. Collectively, the five municipalities are home to 26 900 people. The Italian municipality of Gorizia, with a population of 36 000, lies just on the other side of the border.

Nova Gorica and Gorizia were separated many years ago by the border between the former Yugoslavia and Italy. However, since December 2007, when Slovenia signed the Schengen Agreement, there has been a free movement of people between the two municipalities. Many Italian cities, including Gorizia, have an integrated urban mobility plan. Slovenia, meanwhile, has no tradition of integrated urban transport planning. However, in 2007 Nova Gorica went ahead developed its first SUMP.

The cross-border regional SUMP project is part of the PUMAS Planning Sustainable Regional-Urban Mobility in the Alpine Space project.

The SUMP process – initiated and co-ordinated by the municipality of Nova Gorica - started in the autumn of 2012 with a meeting with the mayors from all the municipalities and representatives of the municipal departments for spatial development and infrastructure, and city wardens. Similar meetings continued during the project.

Work on the SUMP started after the first meeting, during which information on the urban mobility status, problems and plans from the total of seven municipalities was collected. The first report analysing the collective urban mobility status of the municipalities was produced in autumn 2013. A few months later, the overall vision of the SUMP, which included objectives and possible measures for five identified ‘pillars’ – transport planning, walking, cycling, public transport and motorised traffic – was developed.

A number of stakeholders were involved in the process. The local transport operator, architects, the local hospital and university and a shopping centre were consulted during the drafting of the vision, objectives and measures. The Urban Planning Institute of the Republic of Slovenia provided support during the development process.

Nova Gorica also sought to involve citizens. In 2013 it launched a web survey to ask their view on local transport and mobility issues. However, the response was low: only 100 replied.  During 2013’s European Mobility Week, Nova Gorica organised a public presentation for citizens and held a discussion of the status analysis results. An official public presentation of the draft SUMP also took place in 2014. The draft was published on the municipal website with citizens able to comment.

Between October 2012 and June 2014, both Nova Gorica and Gorizia held meetings for main stakeholders to discuss the status analysis report, the SUMP’s vision and goals and the draft SUMP measures. Draft reports of documents prepared as milestones of the development process were also published on the municipal websites and were the basis of discussions with stakeholders.

The integrated SUMP, which cost a total of € 80 000, was finalised in spring 2014 and is now waiting to be assessed by local politicians, a process that will start at the end of 2014 following Nova Gorica’s local elections. Positively, the SUMP process initiated an open discussion and co-operation between stakeholders working on the same topics who were not connected before. Gorizia already had an integrated urban mobility plan and therefore some experience with co-operation across different departments and sectors, but for Slovenian municipalities this was a new phenomenon.

As a result of the European Commission SUMP guidelines and other available resources (hosted on the Eltis Mobility Plans section), as well as a pragmatic trial and error approach (for example, in the case of the citizens’ participation) Nova Gorica was able to overcome this barrier.

‘Nova Gorica’s first SUMP from 2007 was understood by the administration and politicians as a sort of partial document that deals with sustainable travel modes. So it was not taken too seriously,’ says Luka Mladenovič from the Urban Planning Institute of the Republic of Slovenia. ‘But thanks to European Commission guidance, that was translated and adopted to Slovene legislation, the new SUMP will become a more integral document that will have power to influence spatial development and other strategic areas of development.’

Overall, the co-operation between Nova Gorica and Gorizia, despite both cities being in different countries, has worked out well. Since the SUMP is on a more regional level, there are no measures involved that are specific to only one municipality. The measures fit into one of three groups: those with influence across the municipal border; those of regional importance; and those that address challenges present in all municipalities. However, differences in context remain, such as variations in the legal and procedural regulations.

Creating online platforms to receive feedback proved useful, says Mladenovič, but asking the general public for comments on the documents and to get more closely involved in the process resulted in a low response rate. ‘It is hard for non-experts to comment on long-term strategic documents, especially on a regional level, which might be too abstract,’ he says.

Directly involving stakeholders through face-to-face meetings, instead of asking for feedback through email and on the municipal websites, proved to be more valuable. Although attendance was hard to secure, all meetings with the relevant stakeholders took place.

Mladenovič adds: ‘These meetings created the opportunity to provide essential information on the content of the draft report and to have a direct dialogue with stakeholders and receive feedback. The quality of the feedback at the meetings was higher and more in tune with the actual SUMP, instead of the more individual issues submitted through the internet.’

The language difference was an issue at the stakeholder meetings: translating meant that more time was needed and a direct dialogue between the Slovenian and Italian staff and stakeholders was more difficult. Since a SUMP is not required by law in Slovenia or Italy, the document will not be legally binding for any of the included municipalities.  Each participating municipality, however, is reserving budgets and will work on the implementation of the urban transport measures as agreed.